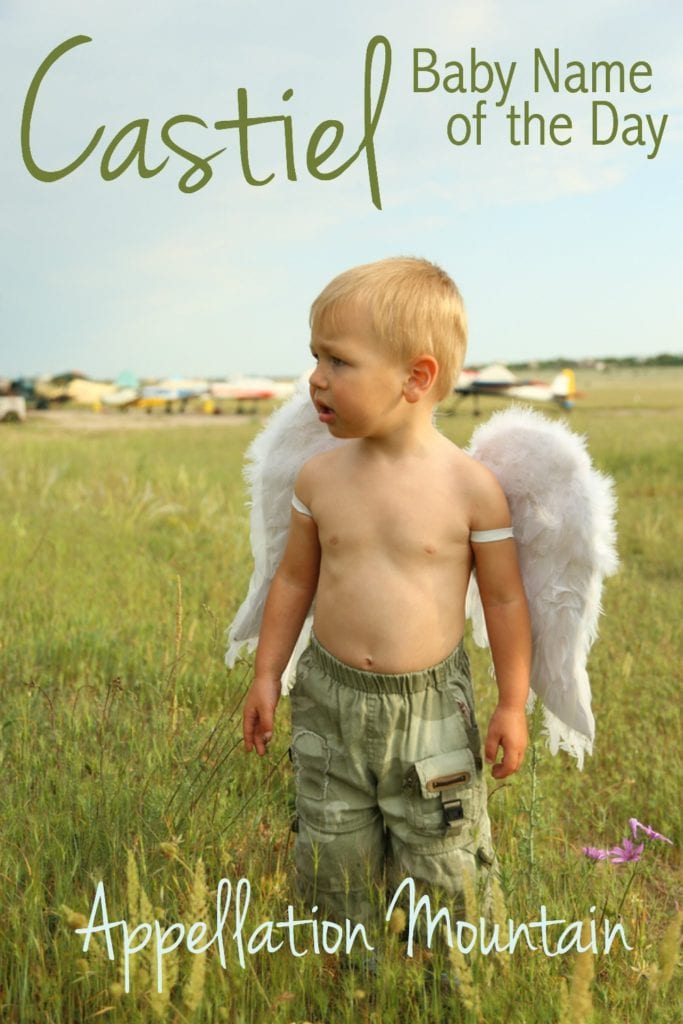 Thanks to Megan for suggesting our Baby Name of the Day.

Castiel might strike you as a new name. After all, it debuted in the US Top 1000 in 2013. But it sounds like an old name – which is equally deceiving.

This name falls somewhere in between. It was first recorded around the thirteenth century, as the name of an angel. But it’s not a name mentioned in the Bible.

Angels are in the New Testament, of course, as significant messengers, but few are named. The traditions and beliefs around angels evolved from the third century onwards, with writers like the thirteenth century St. Thomas Aquinas adding their understandings.

Angelology has continued to evolve. Angels are associated with specific days and planets and spheres of influence, which can make it feel a little bit like astrology, but there’s also serious theological work devoted to the matter.

Most sites – no matter how different their viewpoints – seem to agree that Castiel is actually an alternate spelling for the angel Cassiel.

Given the similarity between the two names, it’s likely that Cassiel and Castiel are the same being, but different meanings are sometimes given. Cassiel is “speed of God,” while the -tiel spelling is “shield of God.”

As for Cassiel, he’s an interesting angel, indeed. He’s said to be a fan of mankind, the angel of “solitude and tears” and a passive angel, who watches rather than intervenes in the events of the world.

Neither name was used for children until very recently, suggesting that pop culture gets credit for the names’ use.

With the -ssiel spelling, the angel has appeared in books, as well as the movie City of Angels. Andre Braugher played Cassiel in the 1998 romantic drama.

City of Angels was based on a German movie. The German version had a sequel called Faraway, So Close! that continued Cassiel’s story, and featured a Nick Cave composition called “Cassiel’s Song.”

The CW’s Supernatural debuted way back in 2005, and has chronicled the adventures of demon-hunting brothers Sam and Dean Winchester ever since.

Castiel first appeared during season four in late 2008. He’s an Angel of the Lord, played by Misha Collins, and he’s there to bring one of the Winchester brothers back from the beyond. He becomes an important – and talented – ally.

This is not Highway to Heaven. Collins’ character can be dark. He’s also a fan favorite, a special guest who became a series regular. The names from the show are great, but Castiel is clearly the break-out star.

Castiel: By the Numbers

The 2008 debut of the Supernatural character tracks closely with the name’s use. In 2009, thirteen boys were given the name.

There’s more to the name’s success than pop culture, though. We’ve embraced similar names for boys, from the evergreen Michael to the similar – and very stylish – Gabriel.

On television, the character’s nickname is usually Cas, but I think Cash could work, too.

While it’s a surprising source of inspiration for a child’s name, with Khaleesi and Anakin in the US Top 1000, it’s certainly a wearable possibility.

What do you think of Castiel? Is it too tied to the television series to consider, or does it seem mainstream?