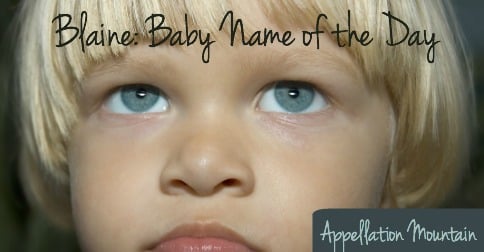 Villain week continues with one from a comic book turned television series on The CW.

Our Baby Name of the Day is Blaine. Blaine comes from a Gaelic name meaning yellow, worn by the sixth century Saint Blane. Like many a color name, it may originally have referred to someone with very blonde hair.

Or possibly from a long list of similar-sounding names, ranging from Scottish to French to English.

Whatever the source, there are plenty of people answering to the surname, including a character from the cinematic classic Casablanca. Humphrey Bogart plays Rick. Full name? Richard Blaine. Another silver screen classic first brought Blaine to my attention: Pretty in Pink.

Molly Ringwald played Andie, a girl from the wrong side of the tracks. Andrew McCarthy played her love interest, Blane – spelled without the i. No one approved of Andie’s romance with the preppy, privileged Blane. Her BFF dismissed him: That’s a major appliance, that’s not a name!

But it took another fictional high school student to cement the name as a preppy heartthrob go-to: Glee’s Blaine Anderson.

Darren Criss played the crooner, introduced as the lead vocalist for a rival cappella group. When Blaine and company are first introduced, they’re the smooth, well-establsihed rivals to the scrappy upstarts of McKinley High’s New Directions. Eventually Blaine falls in loves with New Directions member Kurt, and they went on to become one of the most popular television couples of the decade.

Ready for one more pop culture use?

In 2004, Barbie and Ken decided to take a break. For two years, Ken disappeared from Mattel’s line-up, and the world’s most famous doll dated an Australia surfer dude called Blaine. In 2006, she and Ken re-united, and we assume Blaine caught a wave back to Australia. 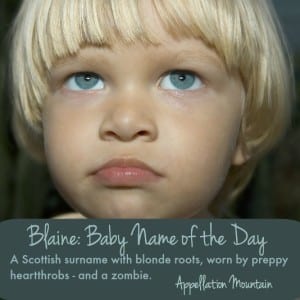 So what makes Blaine a villain name?

If you’re watching iZombie, that’s not a question. The series gives us Blaine DeBeers, a blonde entrepreneur who happens to be undead. He specializes in targeting wealthy individuals, turning them into zombies, and then selling them incredibly expensive brains, prepared at an upscale Seattle eatery.

DeBeers is power-hungry, and seems to get a kick out of the zombie life. He wasn’t exactly a boy scout pre-zombie, either – he was a drug dealer, and when we first meet him, he lies to our hero, Liv, about all sorts of things.

I’ll keep this spoiler-free. Let’s just say that Blaine’s actions are nothing short of horrific, and he’s terribly arrogant and cruel, too.

And yet, unless the series inspires a spin-off blockbuster movie, iZombie is probably much too obscure to taint the name. That makes Blaine a great example of a case where a name can be given to a irredeemable villain, but remain perfectly wearable.

Blaine: By the Numbers

Blaine currently ranks #674 in the US. It’s never been very popular, though it was more common in the 1960s, the age of bold, brisk names for boys. There were 374 newborns given the name in 2014.

As of last year, Blayne is actually more popular. 82 boys were named Blayne, though unlike Blane, it’s never charted in the US.

Overall, Blaine could fit in nicely in our Chase-Blake sound that’s so popular today. And yet, it’s never quite taken off. That could make it a great stands-out, fits-in choice – if you’re not fussed by the small screen zombie.

What do you think of Blaine? Do you find it current or dated?