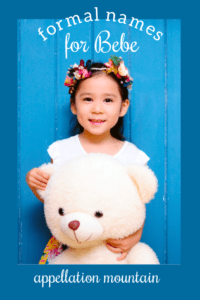 Bebe belongs with Cece and Gigi and Coco. But despite a similar style, this one seems rarer than similar choices.

Could it be that the names that lead to Bebe – or Bibi – aren’t as appealing?  Or maybe there just aren’t as many possibilities compared to Colette and Cordelia, Georgia and Genevieve, Cecilia and Celeste.

But getting to Bebe is easier than it seems at first glance. Here are my favorite suggestions.

Barbara – A Top Ten staple from the 1920s through the 1950s, today, Barbara fits in the young grandmother category. And yet, it’s an ancient name, worn by the patron saint of architects and masons. Barbie is a doll, but Bebe is a stylish update for this classic possibility.

Bathsheba – In the Old Testament, David fell for Bathsheba when she was still married. Much drama ensued.  Perhaps that’s why parents have avoided the name, though it’s really quite pretty.

Beatrice, Beatrix – Could there be a more current name? Stylish parents have embraced this choice – smart, spunky, and until recently, little used.  Beatrice was given name of actress Bebe Neuwirth, of Cheers and Frasier fame.

Bernadette – A B name making a comeback, Bernadette has the B sound required to make this nickname wear well.

Bianca – From Shakespeare to the adventurous mouse in Disney’s The Adventurers, Bianca is a daring name, one that leads logically to Bebe. It’s also the given name of Bianca Andreescu, the young tennis star.

Rebecca – Does this seem like a stretch? If Becca, Becky, and Bex are go-to short forms, the letter B is big for this starts-with-R appellation, and Bebe might work just fine.

Roberta – Yes, you could call her Bobbie. But somehow Bebe feels like a fresh, unexpected option, too.

Bebelle – Designer and television host Genevieve Gorder gave this unusual name to her daughter. It may have come from a short story by Charles Dickens; in “Somebody’s Luggage,” we learn it is short for Gabrielle.

Bellamy – A fast-rising favorite for girls, this surname name could shorten to Bella or Belle, or even Amy. But the strong B sound means Bebe might be another one to consider.

Belphoebe – Strictly speaking, this combination of belle – beautiful – and Phoebe was invented by Edmund Spenser for The Faerie Queen, dating the name to the late 1500s. But it’s never been used as a given name, so I’m filing it with the modern discoveries.

Bluebell – Belle names are big, and Beyonce’s Blue put the color name in the spotlight. Spice Girl Geri Halliwell has a Bluebell, but the name has yet to catch on. The repeating Bs make it a natural fit for this list.

Birgitta, Birgit, Birgid, Birgitte – Of course, you might shorten Bridget to Bebe. But these imports work every bit as well – maybe even better. Celebrated Swedish actress Bibi Andersson was born Berit – yet another related form of the name.

Bibiana – A form of Vivian, Bibiana sounds quite lovely. But it might be a recipe for years of “No, not Viviana. Bibiana, with a B. Let me spell it for you.”

What do you think of Bebe?  Do you like names with repeating sounds like Lulu and Gigi?  Which long form would you use for a daughter? 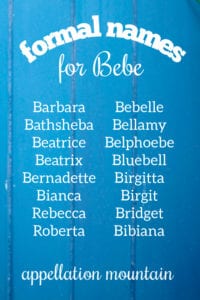