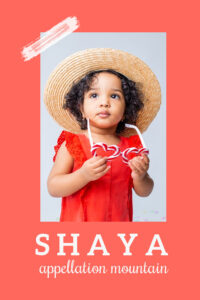 The baby name Shaya fits right in with current favorites like Maya and Sasha, Elijah and Joshua.

Thanks to Lauren for suggesting our Baby Name of the Day.

The girl’s name Shaya is cousin to the Old Testament Jesse, a traditional favorite for our sons.

They both share the Hebrew root shai, meaning gift.

In the Bible, Jesse is the father of King David. In more recent centuries, we think of figures from outlaw Jesse James to world-changing athlete Jesse Owens (born James Cleveland – JC – Owens).

When it comes to meanings, few are as clearly positive as gift. The meaning of the name Shaya is undeniably appealing.

Of course, the baby name Shaya might have more than one origin and meaning.

It can also come from Arabic. If that’s the case, then the first name Shaya means worthy.

That also makes Shaya gender netural, if not masculine. In Urdu, the language of Pakistan, as well as other parts of South Asia, Shaya is almost always used for boys.

And then there are similar sounding names.

Take Irish surname Shea; Séaghdha in the original. It’s the source of so many families with the last name O’Shea.

Shea rhymes with May and means favorable or learned. It’s a unisex option, given to boys and girls alike – especially if their parents are New York Mets fans.

Shaya and Shea aren’t related. But it’s easy to imagine parents considering Shea for a daughter, only to settle on Shaya as a slightly more feminine possibility.

The Hebrew Shai is sometimes used as a diminutive of Isaiah. Isaiah became Ishaye in some languages, leading to the nickname Shay. The association makes Shaya a possible feminine form of Isaiah, too.

And while it feels like a stretch, it’s visually similar to Chaya, a Hebrew name meaning life. (Though the pronunciations are distinct.)

Of course, that Shaya’s ending -a doesn’t make it feminine. No more than Elijah or Isaiah or Joshua.

Unlike those names, Shaya has never entered the US popularity rankings.

Shaya has ranked slightly higher for boys for most of the twenty-first century. It’s become significantly more popular for our sons over the last decade or so. That might reflect South Asian families in the US, or it could be our growing  appreciation of boy names ending with A.

In fact, it’s hard not to think of Shaya as a boy’s name, too. Actor Shia LaBeouf’s given name is yet another cousin to Shai and Shaya. LaBoeuf also pronounces Shia like Shaya – they both rhyme with Maya.

Short names often travel well, and the given name Shaya is no exception.

It’s heard as a first and last name across the world. It was a radio station in Zimbabwe and South Africa. A Danish-Greek singer born Marianna Hansen took it as her stage name. It’s the name of a New Orleans restaurant with a decidedly eclectic set of influences.

Given the name’s ancient roots, it’s not surprising to hear it all over the world. But the occurrences of Shaya are delightfully sporadic and impossible to predict.

Names like Shayana, given to fewer than five girls in 2021, but at least three dozen or so in recent years, could be elaborations of Shaya. Or it might just mix the familiar Sha- sound with an appealing ending.

Shayan is used in small numbers, too, almost always for boys. While Shayanne tends to be equally rare – but feminine in usage, possibly representing a re-spelling of Cheyenne.

DC Comics’ Hawkgirl answers to Shayera in real life. Except when she appeared in the Arrowverse, her name was changed to Kendra.

Shayra sometimes appears in use, too.

The origin of Shaya is tough to pin down, though chances are good that it’s a cousin to Jesse. Other Shaya origins offer equally compelling meanings.

And while it’s a rare name, seldom heard in the US, Shaya fits right in with so many names we love today. Whether that’s female Sasha or male Isaiah, Shaya works.

The name’s popularity and use remains low, but that might be a good thing.

That could make the baby name Shaya a great mix of fits-in/stands-out qualities.

Factor in the attractive meaning of Shaya, and it’s easy to imagine this name wearing well on a daughter or a son.

What do you think of the baby name Shaya? 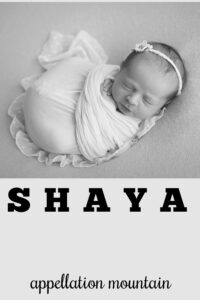