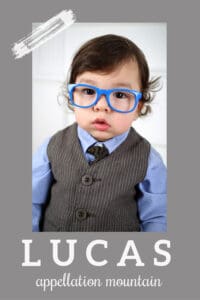 The baby name Lucas feels classic and quite popular today, but it’s a relative newcomer in the US.

Thanks to Evie for suggesting our Baby Name of the Day.

In simplest terms, the baby name Lucas is the Latin form of the Greek name Loukas. Luke is the English version of the above.

So the meaning of the name Lucas is the same as Luke. Both refer to Lucania, a region in southern Italy.

There’s much debate about the meaning of Lucania, but chances are good that it connects to lux, the Latin word for light.

Some sources give the baby name Lucas an even more poetic meaning, like bringer of light. While that’s a little bit of a stretch, it’s the right vibe.

An author of the New Testament and a saint, the Biblical Luke makes the name widely familiar. It also ensures that Luke and Lucas are found across many languages and cultures, throughout the centuries.

There’s Luca and Luka, Luc and Loek, Lukas and Lukasz, to list just a few. And yet it’s nearly always recognizable as the classic boy’s name.

Luke owes its twentieth century discovery to the silver screen.

Fast forward ten years, and the most famous fictional character to ever wear the name emerges: Luke Skywalker, an ordinary farm boy destined to defeat evil and save the world. (More than once.)

The character was created by director George Lucas, who dreamed up Star Wars based on his childhood love of Flash Gordon.

It’s possible George took his main character’s name from his own last name.

In any case, the baby name Luke was rising during the 1970s, boosted by Cool Hand Luke. It might’ve just seemed like the perfect name for an action hero, who, after all, fights with a light saber.

Chances are that most parents would’ve recognized Lucas as a classic name, either because it was a Biblical name or simply because it was so widely used across Europe for so many generations.

But the name’s use is not exclusive to Christians.

Odds are that at least some of these Lucases answer to the nickname Luke. Of course, Luke has fared well, too, hovering just around the Top 30 in recent years.

Listing the famous people who answer to Lucas and Luke would take pages.

Let’s settle for a few familiar to parents naming children right about now, including fictional figures:

That’s before adding in athletes or other public figures.

Overall, the baby name Lucas reads as strong and traditional. With Biblical roots and a long history of use, it feels like a brother for Charles or James.

But it’s also nicely current, an old school favorite at home in the twenty-first century. That makes it more like Liam or even Elijah – names with long histories, but enjoying a fresh run of popularity in the last dozen decades or so.

That doesn’t make Lucas – or Luke – trending in any way. Instead, it makes it a perfect pick for the twenty-first century. It remains a classic, while feeling as at-home with names like Henry and Levi, Hudson and Wyatt.

What do you think of the baby name Lucas? 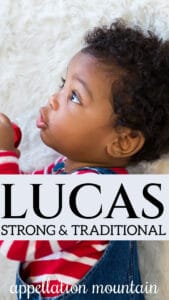 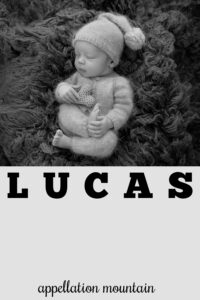