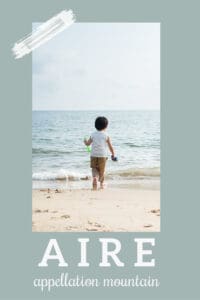 The baby name Aire is the newest entry on the extended Kardashian-Jenner family tree.

But will it follow choices like Reign and Dream into mainstream popularity? Let’s look at our Baby Name of the Day.

AIRE is the NEW WOLF

Kylie Kristen Jenner is the youngest child of Kris Kardashian Jenner and Caitlyn Jenner. Born in 1997, she was already collaborating on brand deals as a freshman in high school. While her older sisters stepped into the spotlight as young adults, Kylie and her sister Kendall were still young when Keeping Up with the Kardashians debuted in 2007.

No matter how you feel about the family – or influencer culture in general – it’s hard to not be aware of the siblings, given their massive impact on pop culture.

And, of course, if you’re into names, well … the Kardashians are catnip.

Kylie and rapper Travis Scott welcomed their first child together in 2018, daughter Stormi. In February of 2022, they welcomed a son. They initially announced that his name would be Wolf Jacques Webster.

And then … they announced he wouldn’t be named Wolf after all. That it just didn’t feel quite right.

Months passed, until Kylie shared a snap on Instagram introducing the world to Aire.

She later clarified that the name is pronounced just air, rhymes with bear.

AIR with an E

We love nature names, but Air is virtually unknown as a given name.

Aire fares only slightly better. Way back in 1920, five girls were named Aire. And in 2019, six girls received the name.

That doesn’t mean it wasn’t used in the intervening years. The US Social Security Administration only reports on names given to at least five children of one gender in any given year.

Chances are that there other Aires – but not many.

Of course, the spelling mirrors a similar name – Skye is more popular than just Sky.

The Greek and Latin aer refers to the lower atmosphere or the sky – the invisible that surrounds us all. It entered English with the meaning largely unchanged.

It’s one of the four classical elements: earth, water, fire, air. Ancient philosophers believed they defined the physical world. From Plato and Aristotle, well int the Renaissance, the concept held. A nearly identical system occurs in Buddhist and Hindu thought.
Now, of course, we know that the air is mostly made of oxygen and nitrogen, an invisible – but very real – gaseous substance that makes life on Earth possible.

Air appears in many a phrase.

Something “in the air” is undetermined. If it’s “on the air” it’s being broadcast. We can air – discuss publicly – ideas or grievances. And we can air out a room – freshen it by opening the windows. You can have an air – an attitude – of many kinds, from an air of mystery to an air of sophistication.

But there’s something about names that direct our gaze upwards – like Skye and Rocket and yes, Aire. It’s almost a virtue name, one that suggests rising to great heights.

And, of course, an air is a tune or a melody; that seems fitting for a musician’s child.

Given the reality show royals’ family tree include another child named Reign, it’s hard not to say Aire and hear Heir.

In fact, ten boys were named Heir in 2021, so it’s slightly more common than the baby name Aire.

By now, it’s a hallmark of the family’s naming style – taking something effectively not used as a name, and making it seem like a perfectly natural choice.

Besides Air and Aire, it’s worth noting that similar possibilities include:

And yet, Aire stands out among them – different and distinctive.

Will the baby name Aire catch on?

Single-syllable word names with unisex appeal are having a moment. Just ask Reign, another name boosted by a KarJenner baby. Dream is used in much greater numbers for girls, but it, too, owes its success to the famous family.

All together, it suggests that Aire might be on the rise soon.

What do you think of the baby name Aire? 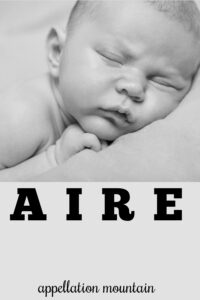 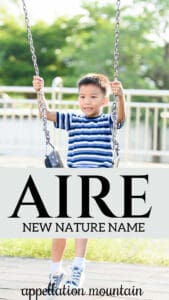