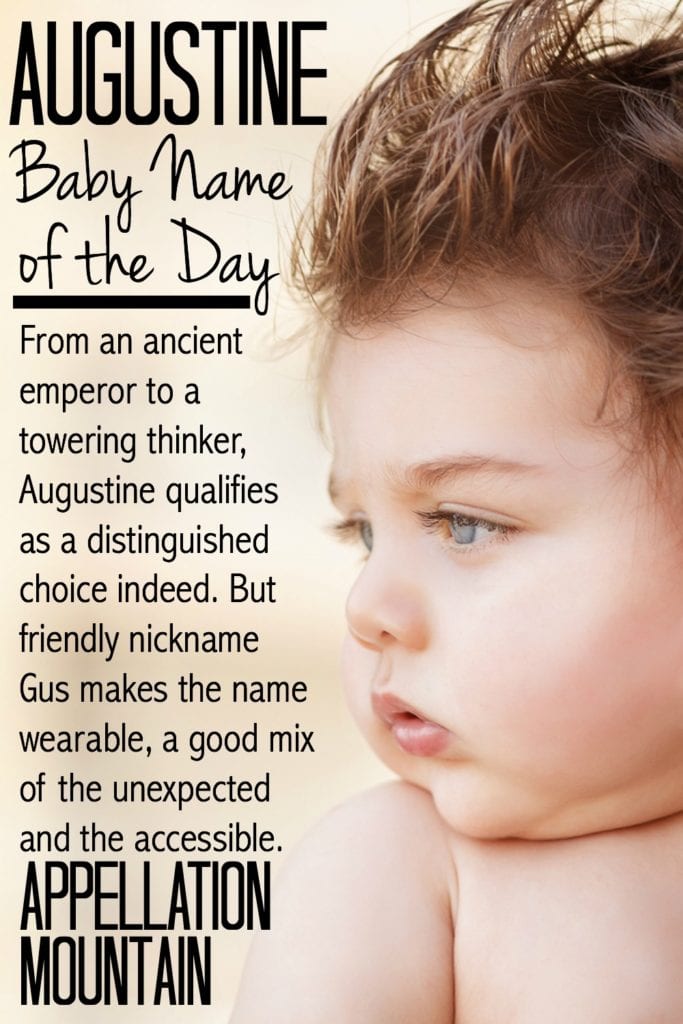 Augustine blends tradition and modern appeal to make a great name for a son.

Born in 63 BC, Gaius Octavius would become the first Roman Emperor, ushering in a long era of peace known as the Pax Romana. Not too shabby!

The Roman Senate granted him the title Augustus in 27 BC.

The title signified a change. Augustus never declared himself emperor, even though he clearly became just that. Instead, it comes from the Latin augere – to increase – and translates as venerable or illustrious.

Over time, Augustinus and other forms filtered into use.

First came the history-changing emperor, then, a philosopher-saint who may be considered even more significant.

Born in the third century, the well-born and highly educated future Saint Augustine pursued a prestigious teaching career and scandalous life. At the age of 31, he converted and became a priest. During his lifetime, he served as Bishop of Hippo, in modern-day Algeria.

His writings remain widely read and broadly influential, not just in Christian theology, but in Western thought.

Then came a second Saint Augustine. This time, the future saint started out as a Benedictine monk, serving as a prior in Rome.

King Aethelburt of Kent had married Bertha, a Christian princess from Paris. Pope Gregory the Great seized on the opportunity to expand Christianity into Anglo-Saxon territory.

Gregory dispatched a band of missionaries, including the former prior. Once established in the new land, the prior became the first Archbishop of Canterbury. He served only a few years before his death, but is credited with converting thousands.

The name is recorded in English throughout the Middle Ages, often in the contracted form Austin.

Today, nearly any of the August names feels fashionable. From the current Top 1000:

There’s also Augusten (as in Burroughs) and other international forms, like Augusto. Austin comes directly from the family, too, and at #69 is technically the most popular – but I doubt many parents are aware of the connection.

Despite feeling traditional, every one of these names is enjoying a revival.

Augustine seems most likely to appeal to parents seeking clearly masculine names that are broadly familiar, but seldom heard.

While August might be misinterpreted as a nature name or word name, the longer forms are more obviously personal names.

Fun fact: it’s a family name for first US president George Washington, with at least three ancestors by the name. It’s also the first name of novelist James Joyce. (The second is Aloysius!)

All of this makes the name a natural choice for parents today. It might as as an alternative to very popular choices like Alexander and Benjamin. Or maybe it will blend right in with the many A names currently in vogue.

Overall, it makes a great stands-out/fits-in choice for a son today.

What do you think of Augustine? Would you use this name, or one of the other versions?