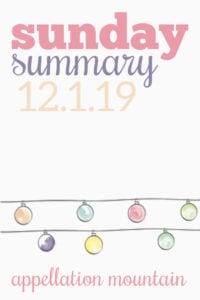 Thanks to Angela for bringing this up: have you heard of the Tiffany problem?

In brief, Tiffany is an authentic medieval name. (The Dictionary of Medieval Names lists it, which feels pretty rock solid to me.) It comes from Theophania – an ancient Greek name that became Tiffany in English. Which follows the pattern – Cecilia became Cecily; Margaret became Margery.

But if you’re a writer, you cannot possibly name your medieval-era character Tiffany, because it feels far too modern. Readers won’t believe it.

It’s like when I read a story set in 2019, and the teenagers are Janet and Cindy. It’s not impossible, of course. It just feels off. Distracting. I adore Stranger Things for lots of reasons, but one part of the puzzle? All the little details of life in the 80s that the show nails. The Tiffany problem reminds us that it works the opposite way, too.

And that’s what the Tiffany problem really represents. It’s not just a funny little quirk that this one name feels out of place in its proper historical era. It’s that all names carry a certain style. We expect to hear them in some contexts, and not at all in others. And it’s not the kind of thing that can be changed with facts.

The images associated with names do shift over time, but at any given moment, we instinctively know whether a name feels right. And that’s the challenge for fiction writers, but for new parents, too. Does this name feel like a name that belongs in our family’s story?

Nancy points out that it’s not enough for a new name-like sound to be introduced; we need to hear it used as a name. She mentions this in her post about Sharlie. As she puts it “personification is key.” I’ll have to keep that in mind when thinking about whether or not something could catch on …

If you go into labor on a flight, and deliver just minutes after landing? This is the only name you can possibly name your baby, right?

Marlie-Mae, Mila-Mae, Gracie-Mae … what’s with all the mini Mae names? It’s big in Australia, and I’ve heard it elsewhere in the English-speaking world. But I wonder … is Mae booming as a middle in the US, too? Hyphenated names aren’t really a thing here, but it may be that we have lots of girls named Mila, Marlie, Gracie, etc. with the middle name Mae. Are you hearing it more often?

While we’re in Australia, I am unreasonably excited to hear what Lara and Sam Worthington name their third son. Brothers are Rocket and Racer, so I assume the choices are … Rebel and Rogue? Okay, that’s director Robert Rodriguez who has boys named Rebel, Rogue, Racer, and Rocket. I suppose there are more cool, edgy, modern R names for the Worthingtons to consider. Of course, more than a decade has passed since Rodriguez chose all of those bold boy names, and now epic picks for our children feel downright mainstream.

How crazy fun is this? An all-name crossword. I’d buy a book of these … 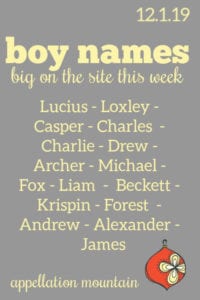 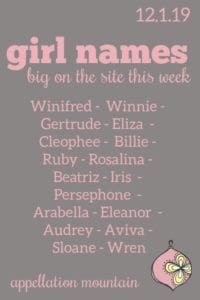 Image by Creative Designer from Pixabay