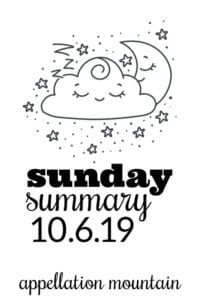 The first time a parent told me she dreamed of her child’s name, I dismissed it as a little quirky. Sort of like love at first sight. It happens, sure. But it’s not common.

Except that, as time has gone by, I’ve heard this kind of story more and more. (And again this weekend.) Sometimes it’s an actual dream. Other times, a parent hears a name and knows immediately that it’s right.

Choosing a name is a deeply, intensely emotional process. I think it can benefit from injecting some logic, especially when you and your partner disagree. And when that moment – the dream, the message – just isn’t happening? Then yes, it’s absolutely time for a process that helps you find a name that will suit your child.

The toughest moments? That’s probably when your first child’s name came to you like a bolt from the blue … and now you’re trying to name a second (or third or fourth) child, and feeling like you have to wait for the same lightning strike.

But I’m wondering: did your child’s name come to you in a moment of inspiration – a dream, or something similar? And if so, did you second-guess your choice?

Does your name obscure – or expose – your heritage? And would you tweak it to make your heritage more – or less – obvious? Fascinating thoughts on the question in this piece at Zora. My take: I used to have a very unusual, ethnic-sounding, but impossible to place surname. People asked about it All. The. Time. Did I mind? Not really. But I was aware of it. Now I have a completely ordinary, vaguely English-ish surname, the kind that no one ever asks about. If I’m being honest, I like it better. But I do very occasionally miss standing out.

It sounds like Michael Sheen named his daughter after Lyra Silvertongue, and I find myself thinking that it’s the best thing ever. Sheen – who you might know from the recent Good Omens series on Amazon Prime – recently welcomed a daughter named Lyra. Lyra is the hero of Phillip Pullman’s His Dark Materials series, and Sheen narrated at least some of the audio books.

SJ calls these trending British boy names “handsome heartbreakers.” They’re a mix of styles – Arthur and Tommy, Jesse and Rowan. I’m not sure I completely get the vibe, and yet, I do feel like they’re out of the same songbook.

Ren picks her favorite sweet spot boy names of 2019. It’s a great list, though I think sweet spot names have to be just a little bit more mainstream.

I think American parents should steal Ida and Alma from Denmark. So gorgeous! And so popular there, even though they’re wildly rare here. 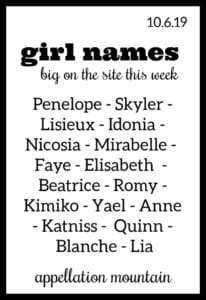 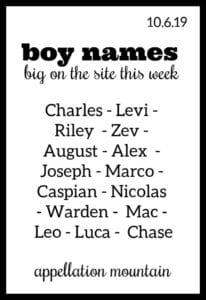 Image by Bellinon from Pixabay