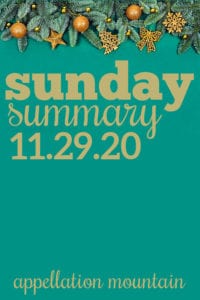 To some degree, we all follow a no-repeats rule. Very few of us give the same name to more than one child. (I mean … George Foreman is the glaring exception.)

Cousins typically don’t share names, either – though that’s relatively new. In some cultures, names were dictated by family custom. Two brothers might both name their firstborn sons after grandpa, nevermind the potential confusion.

Those days are (mostly) over, but how far does the no-repeats rule extend?

It’s a mix of considerations.

In some cases, you know your kid could share the name. But hearing it in use – even if it’s a friend-of-a-friend – just plain takes the shine off.

Maybe it would be awkward. How do you tell your boss that you used the same name for your daughter, too?

Or you know that your friend would feel hurt by the duplication – no matter why you chose the same name.

But here’s the thing:

The no repeats rule doesn’t exist.

When there’s a relationship – friend, boss/employee, cousin – to consider, then by all means. There are good reasons to decide that a name is off the table.

But if there’s no relationship?

Then there’s no worry. You may use the same name that another family at church just used, or that you think so-and-so from accounting picked out for her baby.

Okay, I just made this up, but I think it works.

Think about the parents of the child whose whose name you plan to duplicate.

Would you be shocked to get a holiday card from that person? If so, then you don’t need to worry about duplicating names.

Or, maybe a holiday card is your only communication that’s not casual likes of each other’s vacation pics on social media. It’s that college friend who moved across the country, a cousin-by-marriage from a marriage that has since dissolved. You’re happy to stay in touch – kinda sorta – but your kids can clearly share the same names.

Agree or disagree? Would you draw the line differently? And what does your no-repeats rules look like … if you have one?

A supernatural series set in Victorian England? I’m intrigued by the premise of The Nevers, even before I heard that the characters include a Primrose … and a Penance. It won’t be out on HBO until next summer, though … so I shall prepare to wait.

Oh, and speaking of supernatural series, The Chilling Adventures of Sabrina returns on December 31st. It debuted in 2018, and sure enough, there’s an uptick in the use of Sabrina in 2019. Small, but undeniable.

While we’re in England, let’s check in on British Baby Names. There’s a Digby in a recent set of birth announcements! Plus a Freddie. Oh, and a Bluebell Matilda Poppy in this week’s bunch!

This is a fascinating naming challenge – what would you name a twin brother for Kit Inde, and a younger brother for Rocco Amsterdam? Duana pegs the issue. Sometimes it’s not about style, exactly. It’s about how a name feels when you say it – high-energy, plenty of impact, fun to say. Choosing from the same category of names isnt’ enough; the key is to match the vibe.

A story about pandas and names. Because 2020 needs at least a few feel good stories. And also because I’m wondering if parents will also look for positive, uplifting names when naming their children. The new panda at the Smithsonian Zoo is Xiao Qi Ji – Little Miracle.

That’s all for this week. As always, thinking of you! 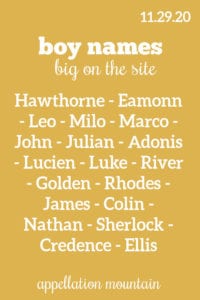 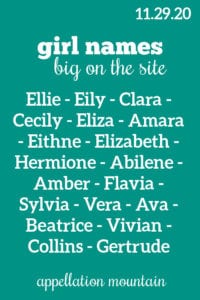