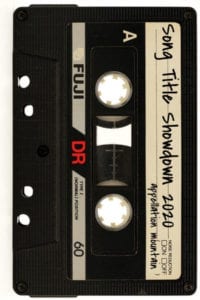 Because we all need a little distraction these days, I present the Spring Song Title Showdown. We’re voting our way through girl names from hit song titles. They’re drawn from the 1960s into the early 2000s, and I’m guessing LOTS of these have you singing along.

We started with sixteen names. You can read the original list – and the songs they go with – in the first post.

But now, let’s jump in to the results from the first round. Sixteen names competed, so this contest narrows it down to just eight quarterfinalists. And scroll to the bottom of the post for the next set of contests.

You can vote however you like – favorite song, favorite girl name, or some combination of the above. I’m not sure which is easier!

With just over 72% of the vote, Lucy triumphs and moves on to the next round.

Officially, Valerie made the list because of the Amy Winehouse hit cover song from 2006. But my favorite Valerie song is Material Issue’s 1991 single.

This was a close one! Classic Mary triumphs, with nearly 53% of the vote versus the up-and-coming Delilah.

No question that Delilah was boosted by the Plain White Ts 2006 hit song “Hey There Delilah.” But it wasn’t enough to put the name on top … this time!

You told me this was the toughest of the tough, and I agree! Iris collected nearly 54% of the vote, though, so that’s the name that moves forward.

Ruby appears in LOTS of songs. Officially, it made the list because of The Rolling Stones’ “Ruby Tuesday,” which is all kinds of awesome. But I’m a sucker for “Ruby Soho.”

Classic Caroline defeated favorite Ava with a commanding 73% of the vote! I’m not surprised that Caroline won, exactly – but whoa! That’s a serious margin.

And so we bid good-bye to Ava, which made the list thanks to Smashing Pumpkins’ “Ava Adore,” complete with a seriously creepy vibe. (Is this whole video a nod to Nosferatu? Must be, right?)

Oh, Cecilia! It might be the song that comes to mind first when we think of girl names in song titles. With nearly 74% of the vote, Cecilia destroyed Roxanne.

There’s The Police’s single by the name, of course, but I’m sending us out with Roxanne Shante’s “Roxanne’s Revenge.” Because I’m forever in awe of a 14 year old girl who could set off the Roxanne Wars. I mean … she looks like she went to high school with my Aunt Mindy, but this girl is bold.

The closest of the contests came down to this one! With not quite 51% of the total, Maggie narrowly slips past Layla.

Layla has a fascinating story, from Derek and the Dominoes original 1970 power ballad, to the Goodfellas soundtrack to the acoustic version, performed by Eric Clapton on MTV. That last one gets (partial) credit for the name’s overwhelming success with parents in the last two decades. But let’s send Layla out with the original. It’s still my personal favorite.

Gloria swept up just short of 52% of the total, leaving Jolene in the dust.

Dolly Parton is in the middle of a renaissance – I can’t explain why I find her so very compelling. (And I mean, I’ve listened to the podcast, trying to puzzle it out.) So while I’m sad to say good-bye, it’s a chance to play this song one more time.

A showdown between two 70s giants: Fleetwood Mac’s “Rhiannon” went up against KISS’s “Beth.” And it’s Rhiannon that carried the day! Like “Cecilia,” it’s one of those songs EVERYBODY mentions when

Beth was probably the first Kiss song I ever didn’t hate. (I’ve revised my opinion since then. My cousin Marc was a rabid fan, and I just didn’t get it for years.) And I’ve come to really adore it over the years. But this week, we say farewell to Beth …

AND NOW … THE VOTING!

Still with me? We’re down to the quarterfinals, with just eight names remaining.

The Beatles versus Fleetwood Mac? That’s a crazy impossible contest, but only one name can win.

These names feel religious, not rock and roll. But when we’re talking about Jimi Hendrix versus U2? Yeah. They both belong in the Song Title Showdown.

Both Iris v. Ruby and Layla v. Maggie were tight contests, so I expect this might be a tough one in the quarterfinals round.

“Sweet Caroline” and “Cecilia” are two names that I’ve heard played in crowds, call and response style. Jubilation! Whoa-ho-ho. And I can imagine sisters with these names. But it’s time to pick your favorite …

Those are going to be some tough contests! Don’t wait to vote. This round only stays up until Monday, April 20th. Check back on Tuesday, April 21st to see which names win, and to vote in the SemiFinal round!

Image by Bruno /Germany from Pixabay