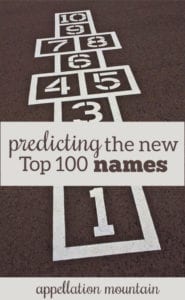 I can’t resist speculating about the new most popular baby names. Data is expected from the US Social Security Administration on Friday, May 8th. The new Top Ten gets all the attention, but it’s worth paying attention to the new Top 100 names, too.

First, it’s a common cut-off mark. Publications often print the Top 100 most popular names. (Okay, normally they print the Top Ten. But if they go any farther, it’s often to 100.) Parents respond accordingly. We say we’re ruling out “anything in the Top 100.” Even the personalized keychains and mugs sold in novelty stores seem to reflect this list.

Last year, I took my guesses for five girl names and five boy names likely to enter the US Top 100, plus added one long-shot for both. Let’s look at my predictions from last year … and then fast-forward to my thoughts about what’s likely to happen next.

My six picks for future Top 100 names were as follows:

Athena – This gorgeous goddess name continued to climb, reaching #117. But it’s not quite there yet.

Emery – My wild card for last year, surname name Emery picks up on Avery, as well as our love of Em names. It entered the US Top 100 at #92.

Ivy – An ecovintage girl name with an appealing sound, Ivy made it to #86.

Josephine – Classic, elaborate Josephine made it all the way to #91.

That’s four hits and two misses – but both misses continued to gain in use. Not bad at all!

Bennett – At #120, friendly Bennett is up slightly – but only slightly – from the prior year.

Miles – Jazzy Miles made it to #98, just inside the Top 100 after years of catching on.

Ryker – Ryker was my wild card, a name that’s big in certain parts of the US … but still just shy of the Top 100, though again, it gained in rank.

Weston – Weston stopped just short of the rankings a #102.

That’s two hits and four misses – see, the opposite of the girls! But, again, all of those four misses gained in use, so I feel good about this list, too.

Let’s turn our attention to the new list. We’ll be reviewing data for children born between January 1st and December 31st of 2019. Here are my six guesses for future Top 100 names. (And I’m not calling any of them wild cards this year … because my wild card guesses turned out to be very bit as accurate as my more sedate predictions!)

AMAYA #130 – Flowing and liquid, Amaya is a globe-spanning name that marries Amelia and Maya. After many years in the shadow of Mia and Maya, this could be Amaya’s year.

ATHENA #117 – I’m keeping Athena on the list for two reasons. First, it’s an accessible Greek goddess name, and that feels like a winning category. The sound appeals, too – A names have long been popular for girls, and the “thena” reminds me of trending Thea.

ARYA #119 – Arya once screamed Game of Thrones. Now I think it’s simply another spelling for musical Aria, a Top 100 favorite, and likely to follow Aria straight up the charts.

ELIZA #131 – Like Athena, Eliza remains on this list for all the reasons it made it in first place: a stylish sound, traditional appeal, and the name’s presence in can’t-stop/won’t-stop musical Hamilton.

HADLEY #104 – Hadley was on my watch list for ages. The name of Ernest Hemingway’s first wife, her story was told in The Paris Wife, a 2011 historical novel. But Hadley had ticked upwards before that, propelled by our love of H surname names for girls – just ask Hayley and Harper. It bobbled for a few years, but I think the name might be rising once more.

ROSE #123 – A default middle name for much of a generation, Rose has slowly stepped into the spotlight. For nearly a decade, this simple, traditional girls’ name has risen in use every year. The numbers suggest Rose could soon return to the Top 100 – a list the name occupied as recently as 1960.

KINGSTON #117 – A little bit regal, and a little bit place name, Kingston straddles two trends. Both work to the advantage of this handsome name chosen by Gwen Stefani for her firstborn all the way back in 2006.

KAI #113 – Short and summery, Kai means ocean in Hawaiian. It feels modern and sleek, a cool name with a story to tell. Plus, as names trend less Western, Kai appeals to more and more parents.

WESTON #102 – This name made last year’s list, too … and it came thisclose to making the Top 100. Weston feels rugged and adventurous, and bound for the top of the charts.

WESLEY #105 – Wesley spent some time just inside the Top 100 back in the late 1970s and early 80s, which might make it sound dated today. Instead, it’s riding a wave of surname names.

SILAS #110 – Justin Timberlake gave the name to his son, and then named an album for Silas: Man of the Woods. The subtle nature name with New Testament ties has hovered just beyond the Top 100 for a while now. I think this could be the year!

Those are my picks for the new Top 100 baby names. Are you hearing more of any of these names?

Image by Wokandapix from Pixabay