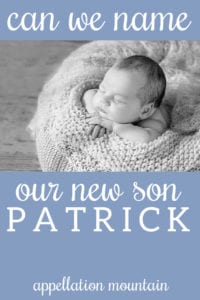 Our son is due at the end of May. We like names like Henry, William, Sam, Jack, Theo, Alex, Charlie, Max, and James. But we know kids with all of those names already.

For a while we were thinking about Joseph, but it never felt right.

The name we keep coming back to is Patrick.

But … does anybody really name babies Patrick right now?!

We’re not Irish, not even a little.

And I think the nickname Pat is pretty bad.

Patrick, though, makes both of us smile. But only Patrick. Will people call him Pat?

Are we crazy for even thinking about naming a baby Patrick?

It sounds like you know LOTS of kids already. That’s a challenge, because it can mean that some of the best names are taken off the table.

But it’s a good thing, too.

Because you already know that some boys are James, not Jimmy, and William, not Will. Or the opposite. Maybe their legal name is Alexander or Charles or Theodore, but you’ve only ever heard them called by the shorter version.

I think Patrick is, too.

That wouldn’t have been the case in another generation. Back then, Jim and Pat were defaults. But these things do chance.

Except … Patrick is kind of perfect. And you both already love it! So let’s turn to your questions.

Is anyone naming their sons Patrick?

But we’re not even Irish!

It’s Latin, from Patricius – nobleman. It’s also the root of our word patrician.

The future saint’s birth name was Sucat. (Probably. Not all of the details of his life are certain.) We know he was born in Britain, kidnapped as a young man and taken as a slave to Ireland. While in captivity, he converted to Christianity. Patrick escaped, but eventually returned to Ireland as a preacher and converted the country.

Which is why Patrick feels so inescapably Irish. Well, that, and bajillions of glittery green shamrocks that appear every March 17th.

While Patrick feels Irish, it’s a classic first, used all over the world, in nearly every European language, and across centuries. Founding Father Patrick Henry wasn’t Irish; neither is current NFL star Patrick Mahomes.

Some people might assume, or even ask … but it’s not really that surprising if your answer is no.

Will they call him Pat?

Introduce your son as Patrick, and my guess is that 99% of the world will follow suit. I’ve come across a few small Patricks, and they all use the full, two-syllable version of the name.

If you worry that some might want a nickname – or even you might find yourself casting about for an affectionate version of Patrick – then I have a suggestion. Patch! It’s unexpected, but follows logically from Patrick.

But what if someone does?

You might get a kick out of this story: an ESPN announcer kept referring to Patrick Mahomes as Pat. Until his mother tweeted at ESPN + got an apology.

If it’s your elderly great-aunt that you see once a year, I’d probably shrug it off. But if your neighbor or a caregiver or anyone else in your everyday life refers to your son as Pat? Politely saying, “Actually, we call him Patrick” is probably enough in most cases.

Besides, your son will soon be talking and introducing himself as Patrick!

So, no, you’re not crazy at all for considering Patrick for your son’s name. It sounds perfect!

Every name has a drawback or two. Patrick fits your general style requirements, isn’t being used by anybody in your immediate circle, and has a strong, classic vibe. It sounds like you’ve found your son’s name!

Readers, what do you think? Is there anything else Nora should consider? Do you know any Patricks who are never called Pat?