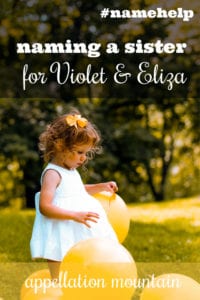 Kara writes: Sorry for not writing sooner! It was all a lot of worry for nothing. Lucy Josephine is here, and we’re all so in love. Once we chose the name, we knew it was perfect. Thanks to everyone!

My husband and I agree on three girls’ names, but we don’t like any one of them better than the others. We’re still using the same list from our first pregnancy, though we’ve crossed off a few names over the years. They are: Amelia, best friends’ daughter, Chloe, just don’t like it as much as we used to, Ella, because we used Eliza instead, and a few others that were never top of the list.

Her middle name will probably be Josephine, after more than one Joseph in our families. Our last name is one syllable, and starts with an S, which rules out a few names we like, like Alice.

So how do we choose? Should we flip a coin?

First, a story: my grandmother couldn’t decide on a middle name for my father, some seventy-plus years ago. Legend has it that she put all of the names they were considering in a hat. The one she pulled out was Walter, and it became my dad’s middle and eventually my brother’s middle name, too.

So random? It’s an option.

But we don’t have a three-sided coin, so let me give you my reaction to each name.

I don’t think Penelope is too long to be a sister for Eliza and Violet. They’re all energetic names, popular today but with history aplenty. That makes them sound like a well-matched trio. Plus, nickname options abound if you did want to shorten Penelope a little.

But your preferred middle name is Josephine. That would make your daughter’s full name seven syllables, plus one more for your surname. Eight’s not unreasonable, but it is a longer name than you’ve chosen before. (Pretty much double Eliza Grace and Violet Marie.)

So I’m inclined to rule out Penelope on these grounds.

Can Kara’s daughter be Cora? Of course! Plenty of households include a Henry Sr. and Henry Jr., and that’s the exact same name. Cora Josephine is lovely, too.

And yet … if you feel like you might trip over Kara and Cora ? Then that’s good enough reason to move on. So much as I think it’s great, I can see the wisdom in choosing a different name.

And here’s the different name: Lucy! Lucy sounds just like a sister for Violet and Eliza. It’s lovely and vintage, but very much at home in the modern moment. It’s on the shorter side, sounds great with Josephine as a middle, and feels very familiar, too.

Because the logic seems so strong to me, I’d encourage you to try out thinking of your daughter as Lucy for a few days. If you order coffee or anything like that, I’d consider giving the name Lucy to the barista , instead of your own. (That way you can hear other people say it.)

But is this decision just too easy? Readers, I feel like I might be missing something. Please let me know what you think in the comments, and take our poll here.