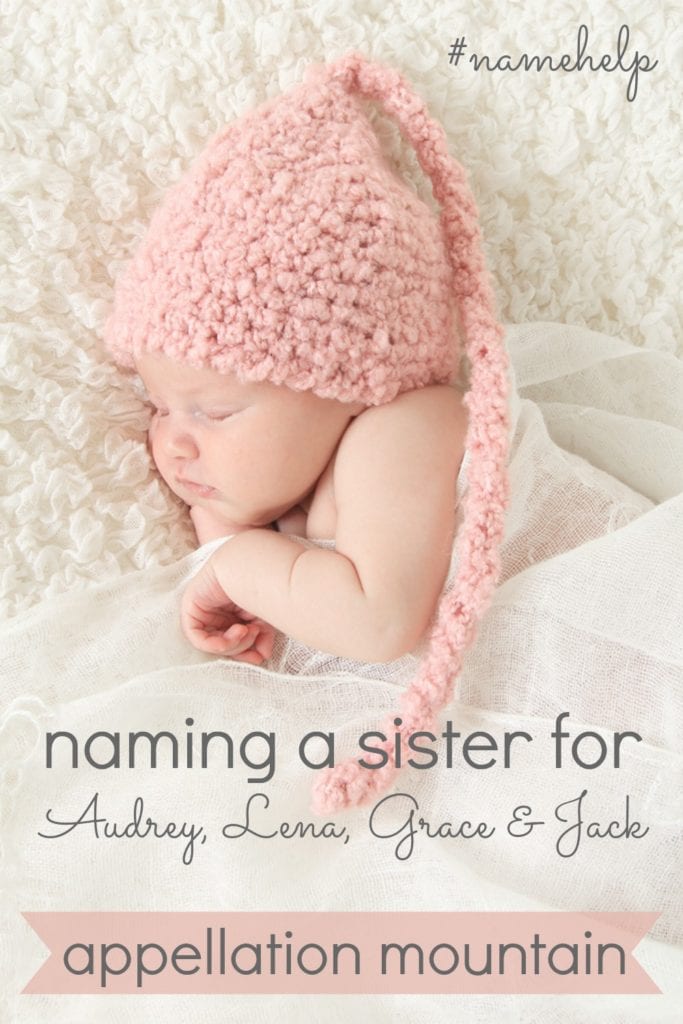 Name Help is a series at Appellation Mountain. Every Saturday one reader’s name questions will be discussed.

We’re expecting baby number five at the end of November. This will be our fourth girl, and last child. Our children are:

We like easy names, and we don’t want anything too different. Our last name is M()rg@n.

If this baby was a boy, I liked Max, Owen, and Levi. Grace’s name was almost Adeline, but we worried about spelling/pronunciation, and don’t like Addie as a nickname. (We really don’t like nicknames, except Grace is usually Gracie.)

We’ve now decided we don’t want to repeat initials, so no names starting with A, L, G, or J, and probably not M or D, either. (I know, Max and Levi break those rules.)

Coming up with names was never really hard for us, except maybe for Grace. This time, it feels like we know kids with all of the names that we like, and there’s really nothing left. We like names that are names, not words (is it weird that I don’t think of Grace as a word?) or last names.

My mom’s name is Kathy – not Katherine or Kathleen – and we want the middle name to be after her, since she is the only grandparent we have not honored.

Read on for my response, and leave your thoughtful suggestions in the comments.

I think there are two challenges with naming younger children in big families, and you’re experiencing them both.

First, you do use up your go-to names.

But more importantly, you know so many kids! If each of your four children attends school/nursery school, that could easily be 100 classmates. Add in family and close friends, neighbors, friends you see at church, teammates from sports or kids your kids meet in dance class or swim lessons, and it quickly becomes a sea of names that are all used up.

My advice is to avoid only the names that would feel too repetitive. Nieces and nephews’ names are usually off the table, and probably close friends’ kids, too. But beyond that? It’s kind of crazy-making if you dismiss names because one of your kids once played on a soccer team with a girl called Madison.

Ruby – Your children’s names seem vintage, but not too dusty – they’re mostly back in the current US Top 100. (Lena ranks in the Top 300 – much less common, but still in the same style category.) Ruby doesn’t repeat the vowel sounds from your older kids’ names, so I think it works well.

Hazel – If I’d suggested Hazel to you a few years back, it might have seemed too different. But now the name is in the Top 100 and rising. It’s definitely become a mainstream possibility. Plus, it sounds distinctively different from your older kids’ names while still fitting in, style-wise.

Maya – If you decide you’re willing to consider M names, what do you think of Maya? The style is slightly different, and yet I like the sound of Audrey, Lena, Grace, Jack, and Maya together.

Chloe – I’m sure you know a girl named Chloe. Maybe three. The name has been consistently popular for years, entering the US Top 100 in the late 1990s. But if none of them are too close to your family, I think Chloe could work nicely.

Clara – Clara seems like an obvious choice. Vintage, feminine, nickname-proof, but with a different initial and a distinctive sound.

Vivian – Evelyn always make me think of Vivian. It might shorten to Vivi or Viv, but I think I’d put that in the same category as Gracie. Yes, it’s a nickname, but it’s more of a casual/affectionate one, rather than a name that will replace her given name.

The more I look at this list, the more I have a favorite: Evelyn Kate. Evelyn has a different ending than your older kids’ names, and a different first initial, too. Kate honors your mom, but isn’t too obvious. (Since you used Elise for Lisa, I’m guessing you’re open to a little bit of re-invention.)

My second favorite would be Ruby Katherine. Ruby was the name that came to mind the second I read your list of names, and I think it works beautifully for your family.

Readers, what would you suggest for the family’s new daughter?