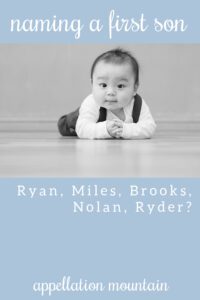 My husband and I are expecting our first on Valentine’s Day. We didn’t start talking about names seriously until after our ultrasound tech said that it’s a boy. (I had a hunch anyway!)

While I wouldn’t say we disagree on names, we don’t really agree, either. I don’t hate any of his suggestions, and he won’t rule out any of mine. But none of them feels better than the others. It’s almost like we could pick one from a hat.

So where do we go from here?

Our kids will have my husband’s last name, a very common, two-syllable, J-son last name. (This rules out John, but that wasn’t on our list anyway.) I do want the names to sound good together.

So far, we have the following lists.

My husband has a very unusual name, one that his parents made up by combining their names, and he really wants to choose a normal name.

First, congratulations on your first!

There’s a subtle difference I hear in your two lists. Your husband’s list sound a little more 2000, while yours is far more current.

Here’s what I mean: Austin peaked around 1995/96; Ryan in the 1980s; Hunter right around the year 2000. Nolan and Ryder might still grow in popularity, but they’re firmly established names.

Turning to your list, Elliott, Brooks, and Miles are still very much gaining in use. Cooper and Wesley are a little more complicated, but overall, they still feel like very current choices.

There’s no good or bad to either list. In fact, sometimes I encourage parents to stick with names that have already peaked. After all, they’re broadly familiar – and unlikely to turn around and rocket to the top of the popularity charts. (Though anything could happen.)

But it does make me wonder:

Is your husband inclined to choose names he’s heard on real people – even if they’re just athletes or friends-of-friends’ kids? And maybe you’re looking at a different source – like name sites, apps, and blogs? It can result in two slightly different – but mostly compatible! – lists.

And that’s the thing: you’ve got lots of really good choices already, and it feels like it took some work to get here.

Rather than adding to your list, I’m going to suggest you check out Nancy’s Weighted Decision Matrix.

Here’s how it works:

I hear two clear criteria in your letter: first, you want a familiar, well-established name. Second, it needs to sound good with J-son.

I’m guessing there are more criteria once you talk about it!

And if you need a good starting place, for that conversation, consider this advice.

Without actually doing the math, I’d rank your choices something like this:

It’s just not great with J-son. I’d drop it to the bottom of the list.

A great choice with your surname. Familiar to most, but still gaining in use.

A good balance of all of the above.

Love the way it sounds with J-son. But would it bother you to spell it? (Elliott-with-two-Ts versus one?)

Like Cooper, I think the -r ending works well with an -r ending surname.

But again, like Brooks, I think the -s ending names are the best of all. Miles straddles the divide between current favorites and true classics. (Think Myles Standish from the Mayflower.)

It’s alright with J-son, but Nolan J-son repeats the rhythm and sound.

I think Ryder is a little more modern than some of the names on your list, though overall seems to hit all the right notes.

An interesting choice. How do you feel about nicknames? Because both Wesley J-son and Wes J-son are great, but it seems likely that you could end up with a kid who prefers to be Wes. Is that a bonus or a drawback?

Overall, my favorites are Miles, Cooper, and Ryan.

That said, I love the rhythm of Elliott – with that extra syllable – combined with your surname.

I wonder if something like Miles Elliott J-son would appeal? Or Brooks Ryan J-son?

If you really do feel like all ten are equally good options – or maybe if you only narrow your list to two or three – picking from a hat (or flipping a coin) isn’t actually a bad strategy.

Remember: you don’t have to commit to the name that random chance assigns. But it helps you evaluate your feelings a little more closely.

Imagine you’re down to just Hunter and Ryan, and a coin flip decides his name is Ryan. If you’re feeling deeply disappointed, well, that might be a good sign that Hunter was meant to be your son’s name all along.

In brief: analyze. And then sit with the results and see if they match how you’re feeling.

Readers, what names would you suggest to Kayla and her husband? Any tips for narrowing a favorite list?