Name Help is a

series at Appellation Mountain. Every Saturday, one reader’s name questions will be discussed.

Amy K. and her husband are adopting!  Older siblings are:

Their new son is joining their family from China, and they’re leaning towards keeping his birth name as a middle name, especially if it appears to be especially meaningful.

What they’re looking for in a first name:

Amy K. described their taste as “literary and classic.”

Read on for my advice … and please share your suggestions in the comments!

Congratulations on your new addition!

Maybe the challenge in finding the right name is this: a classic name that’s not currently in the US Top 100 is on plenty of parents’ wish lists.  Which tends to push the names that qualify into the Top 100.  My first thought was Oliver – as in Twist and Wilde.  But Oliver ranked #52 last year. Henry?  #37, and I won’t bother counting the many Henrys that we know.

Except you nailed it with your son’s name, Wesley.  Because not so far beyond the US Top 100, there are lots of names that feel familiar without being common.  Happily, there are tons of names that hit the sweet spot between Oh, we know three other kids called that and Is that even a name? 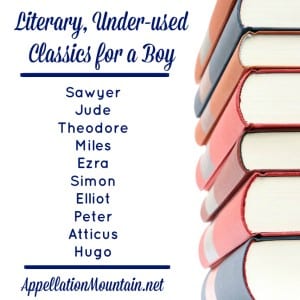 Let’s start with some possibilities that I’ve definitely heard in use, but not so frequently to think that they’re too popular:

There are a few less common names that also seemed worthy of consideration:

My sense is that you’re not using nicknames for your older two children, and I think that’s probably why my favorites are Ezra, Elliot, and Hugo.

But I know others will have lots of great suggestions and comments, too!

Readers, what would you name a brother for Vivian and Wesley?