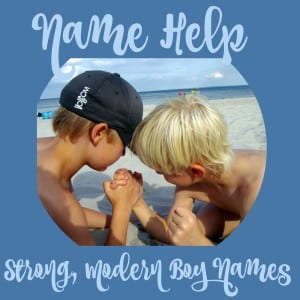 Roma and her boyfriend are expecting a son early in 2016. She writes:

My boyfriend doesn’t seem to be as interested in exploring unique name options as I am. He has a very short list of names: Nolan, Logan, Mason, maybe Scott. He really likes Nolan. I don’t mind that first name, but all of his options are in the Top 100. It is important to me that our son is not Mason #3 in school.

I want a strong but unique name for our son. Some of my favorites: Orson, Kane, Duncan, Hudson, Dane, Cove, Julian, Everett. I am open to a wide variety of suggestions.

A bit about us:

I am a professional Mixed Martial Arts fighter. My boyfriend is also a grappler and a fly fishing guide. We both love the outdoors.

The baby’s last name will be S1del1nger (normal pronunciation as the 2 words “s1de” and “l1nger”) so I think names ending in “s” or “er” are out.

I would love your help with name suggestions that might make both of us happy! Thank you so much in advance.

For what it’s worth, there’s almost always one parent who is much more interested in names than the other – but that doesn’t mean that the less-interested-parent won’t want to veto suggestions, which makes it challenging.

The good news? Your lists aren’t miles apart. In terms of sound, Nolan, Logan and Cove share a long ‘o’ sound. Scott, Kane, Dane, and Cove are short and complete. Mason, Kane, and Dane have that bright long ‘a’ sound. I’d call most of the names modern in spirit, and I think strong is another good word to describe all of your choices.

There’s also more overlap in terms of popularity than you might think. Let’s take a closer look.

And yet there is a key difference between your list and your boyfriend’s list. Scott is unusual for boys born in 2016, but it’s been very, very popular for decades. Logan, Mason, and Nolan feel like solidly established names. Your list tends towards the less recognized – Duncan and Everett are rising, but they’re not widely familiar as given names.

This makes me think that there are two directions you can go:

Now, on to my suggestions:

Ronan – It’s an awful lot like Nolan – strong ‘o’ sound, Irish roots. But it ranked #366 in 2014, making it far less common than Top 100 name Nolan. One downside? Rowan, Roman, and other Ro- names are equally popular. Roman might be an equally appealing choice, one that brings to mind the mighty ancient empire, though at #113, it’s more popular.

Donovan – Another surname name, this time with the ‘v’ of Everett and the three-syllable rhythm of Julian. Donovan ranked #284 in 2014, making it less popular. Another bonus? Nothing really sounds like Donovan, though other D- names, like the Irish Declan and Scottish Duncan, are also trending.

Reed – Reed ranked #317 in 2014, and Reid was #259. Either spelling shares some qualities with names on your list, like Kane and Cove, but it feels slightly more expected, closer to your boyfriend’s suggestion of Scott. I suspect that you might like Reeve even better – it’s an occupational surname for a royal official in medieval England.

Royce – If not Reed, maybe Royce? At #475 in 2014, it’s less popular than most of the names on your list. Another surname name, this one is associated with Rolls-Royce automobiles, but doesn’t feel nearly as out-there as naming your kiddo Chanel or Armani.

Gray or Grey – Sticking with short names, how about Gray? Grayson is a Top 100 fixture, while Grey comes in at just #911, and Gray has yet to crack the US Top 1000. The downside, of course, is that you might be asked if you’re a big Fifty Shades fan. And yet, I think this color name has enough of an on-trend sound and pre-movie momentum to be used for a child in 2016. I think it strikes the middle ground between Scott and Kane.

Will or Willem – William is probably much, too much of a buttoned-down classic for you, but what do you think of just Will? It feels like a strong name, as in willpower. And it has some of the same appeal as Scott. If just Will seems too short, there’s always Willem, the form of the name used in Dutch, and made familiar by actor Willem DeFoe. Just Will ranked #761 in the US in 2014; Willem does not appear in the Top 1000.

Xander – Your husband seems to respond to names with more history of use, but you prefer names that are less conventional. I wonder if Xander could be the perfect compromise? Alexander has been a Top Ten choice for the last few years, and a Top 100 staple for even longer. Xander could be short for Alexander, but it also stands on its own as a given name, and it feels thoroughly modern. At #211 in 2014, it’s slightly more popular than most of my suggestions, but still well outside of the Top 100.

Garrett – In the 1990s, Garrett was a Top 100 name, peaking at #74 in 2000. And yet, it never felt too popular. It has a sort of Old West swagger – Pat Garrett was the sheriff who shot Billy the Kid. I wonder if it might hit the right note for two reasons: first, it shares the ‘tt’ ending of Scott and Everett. Second, it ranks #236 today, making it relatively unusual for boys born in 2016, but has enough history of use that it might feel comfortable for your boyfriend.

Overall, it seems like you’re open to a great many names, so it’s a really a question of finding one that will satisfy your boyfriend’s tastes. Names like Garrett and Xander seem like the best choices to meet him in the middle.

But if those just fall flat to your ear, I wonder if your boyfriend would be willing to examine why he’s drawn to Nolan and Logan and Mason. If it’s important to him to find a “normal” name, it might be worth sitting down with the current popularity list. Since one of his favorites (Scott) ranks all the way at #425, it seems like he might be willing to take another look at your choices, like Everett, that are actually a little more conventional for a boy born in 2016.

Readers, what would say to Roma and her boyfriend? Are there some great strong, modern choices for a son that you would add to this list?