Name Help is a series at Appellation Mountain. Every Saturday, one reader’s name questions will be discussed. (What’s that? It’s Sunday, you say! Well yes. Yes, it is. During March Madness the consults are bumped a day.)

Jamie is a self-described rocker chick with “lots of tattoos.”

She’s trying to name her first child – we’re looking for boy and girl names – and isn’t sure where to start, except that she’d like some real rock’n’roll style to her child’s name.

The last name is two syllables and sounds like Jody with a K.

Read on for my response – and please share your thoughtful comments and suggestions below!

Congratulations! I think I know a little bit of what you’re going through. Your first trip into a baby superstore can be sort of shocking – lots of pink, blue, fuzzy yellow ducks. If your life has been more rock’n’roll than rock-a-bye baby, it can leave you wondering where you fit in, and whether you’ve got to trade black leather for pastel pink.

The good news? It’s easier than ever to be true to your personal style while pregnant and parenting. One of my favorite new mom memoirs is Rockabye: From Wild to Child by Rebecca Woolf, the blogger behind Girl’s Gone Child.

It’s especially possible to be true to your style when it comes to baby names.

Rocker style isn’t a lot to go on, but here’s how I’m reading it:

There are lots of surname names associated with legends from rock’n’roll. But they might be more mainstream than you’d like – Lennon, Marley – or possibly not your flavor of rock – Crosby, Dylan. 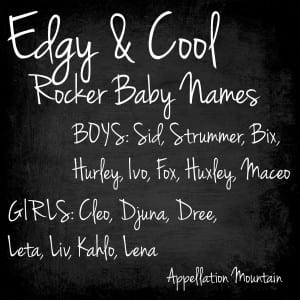 Assuming that you’re looking for something slightly more on the edge:

Readers, what do you think? Are there names that feel edgy and cool that you can suggest to Jamie?