I have two children from a previous marriage, Colben Hunter and Felix Adamson Luca. My husband and I have one child together, Mila Davide Isadora, and we’re expecting our second – and last! – baby early in 2016.

We have a giant list of requirements, but this is our LAST child so we need to do it up right!

My husband is Ukrainian and we need names that:

For a boy, I don’t like Ukrainian names, and I don’t want anything overly popular, like Jackson.

For a girl, the name can be long or short, as long as it isn’t terribly popular.

So far, we have only agreed on Sebastian and we’re kind of lukewarm about the name.

I love British-sounding names. My husband would be happy with a Bogdan – no!

Naming across cultures can be tough! I recently chatted with a Polish-American dad about Polish names, and he mentioned that he’d loved the idea of Zbigniew for a son. Zbigniew! It’s the name of one of my favorite uncles, so I completely get it. But I cannot imagine sending a kid to school with Zbigniew written on his lunchbox, can you?

So Bogdan and Vsevolod are out, and we need to find names that work in both cultures.

My favorite technique is to look at names that are big in the other country, and go from there. I’m not sure if you’re concerned about how the name will be perceived in the Ukraine. (Too trendy, too granny, etc.) I don’t have a great resource for name trends in Ukrainian, but if that’s a concern, maybe there’s a cousin you can ask? (Or a reader here who can provide some insight?)

One additional factor is that Ukrainian is written in Cyrillic. Any name has to be transliterated, which means there are multiple possible spellings in English – and lots of potential for confusion. I’ll stick with the most common English language spellings, but I might be missing something in translation. 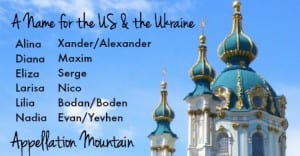 Alina – Alina ranked #159 in the US last year, while Alena was #617. Not too common, though both names are on the rise. It’s popular in the Ukraine, though it’s tough to gauge exactly how popular, as there doesn’t seem to be an official list. I’ve also seen it spelled Olena, which strikes me as rather distinctively Slavic – but I think Alina/Alena would be better in the US. Colben, Felix, Mila, and Alina – that seems like a great quartet.

Diana – Does Diana seem too common? It’s never been really popular in pure numbers. In the US, Diana ranked #297 and was falling in 2014. It was in the Top 100 from the 1940s through the 1960s, and again in the 1980s. (Thanks to the very popular princess!) But even then, it hovered in the upper half of the rankings. Diana crosses borders nicely, but isn’t too common in the US. Still, I’m not sure if this is a style match with your older children’s names.

Eliza – In Ukrainian, Elizabeth becomes Elizaveta. So Slavic! And, I think, reasonably wearable in the US. But it seems maybe a touch too long and too much a heritage choice with Colben, Felix, and Mila. So maybe just Eliza? Even if it isn’t common in the Ukraine, I think it would be easily recognized and wearable. Eliza ranked #212 in the US last year, and is falling – though Elizabeth remains very popular.

Larisa – This is one of my favorites. I went to high school with a handful of kids from Ukrainian families, and this seemed to be a go-to name for girls. It’s very possible that means it is dated in the Ukraine today – the equivalent of Ashley or Jennifer in the US. But it’s seldom heard in the US, which makes Larisa seem like a great sister name for Colben, Felix, and Mila.

Lilia – Lilia is listed on Behind the Name as a Ukrainian name. It works well with all of the Lily names in use in the US. That could be the challenge with Lilia, of course – she might have a Lily and a Lilliana in her kindergarten. But it does seem to cross cultures nicely.

Nadia – Nadia is trending in the US, thanks to her stylish -ia ending. It’s also a staple in Slavic languages, which might make it a good choice. Colben, Felix, Mila, and Nadia. I started out looking at Ukrainian names to find options for boys’ names, the same way I approached the girls’ list. But I hit a brick wall pretty quickly! I can’t tell if it’s because Ukrainians really do prefer traditional names for boys, or if it’s just a limit of the information that I could find, but there weren’t tons of possibilities. So I took another approach: I looked for names that seemed to be used in Ukrainian that sounded like familiar American names. I think that’s a good strategy, but I also worry that the names will be too familiar to appeal to Mischa and her family.

Xander – Alexander is probably way too popular in the US for you, but it’s the ultimate Slavic-English crossover name. I think it’s usually transliterated to Oleksandr or Oleksander from Ukrainian, but everyone will recognize the name in both countries. While Alexander is super popular in the US, Xander might hit the right note. Colben, Felix, Mila, and Xander.

Maxim – Oh, if only there wasn’t the racy magazine, Maxim would be a hit! It’s a great crossover name from most Slavic languages, Ukrainian included. I’ve seen it transliterated as Maksym, too, but I’m not sure if that spelling would fly in the average American kindergarten. (Though plenty of parents do choose more authentic spellings.) I’m not sure how wearable this one is, but I feel like I have to suggest a Max name.

Serge – There’s really no English form of Sergius, though Sergio and Sergei are familiar. I think Serge is an out-there heritage name that works in the US. We’ve got plenty of boys called Gage, after all. Colben, Felix, Mila, and Serge. I’m not certain how this one sounds in Ukrainian, but it’s clearly a name that would be readily recognizable.

Nico – This might be a stretch. In Russian, Nicholas becomes Nikolai, so I’m confident that Nico would work as a cross-cultural name. But in Ukrainian, I believe Nicholas becomes Mykola – with an M sound. Still, it’s a thought, because Nico is fresh and modern and interesting, while Nicholas is the kind of classic name that crosses borders with ease. Nikolai Gogol was born in the Ukraine, back when it was part of the Russian Empire.

Bodan, Boden – While I’m talking crazy, have you ever considered Bohdan? Bohdan is a form of Bogdan. While I agree that Bogdan is a non-starter, Boden is a fresh, modern favorite. And, spelled Bodan, it might be nicely cross-cultural. It’s definitely one to talk over with your husband, and possibly other family members, to get a sense of how it would be received. But Boden is hovering just outside the boys’ Top 1000 as of 2014. Colben, Felix, Mila, and Boden. Or Bodan. Or Bohdan. That’s a famous seventeenth century Bohdan in the portrait.

Evan – I found Yevhen listed as a Ukrainian form of Eugene. Which sounds an awful lot like Evan. Only I think Evan might be much too popular for your tastes. And Yevhen isn’t the only form of the name in use, so I’m not sure how familiar Yehven might be – it could be relatively rare.

There do seem to be two directions to go: either choosing a rarer name that sounds like a Ukrainian name – but is probably unrelated – or choosing an evergreen classic that translates into Ukrainian. (And probably a dozen other languages, too!)

Alina seems like the standout from the girls’ list, and I think Serge might be the best bet for the boys – though I think Nico has potential, too.

Readers, what would you suggest as a great Ukrainian-English crossover name? I’d especially love help with the boys’ list. It seems like those are tough to find!