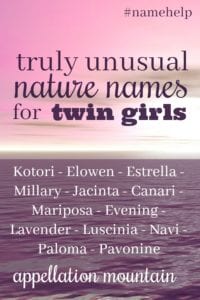 Update: They’re here! Welcome to Colibri Belle and Mariposa Lea. Thanks to all for their input; Charity really enjoyed reading everyone’s suggestions!

Hello! I’m looking for help naming one of my twin girls. They are due in 3 weeks! We have decided on a name for one of the girls, Colibri. It means hummingbird in several different languages including Spanish and Italian. My boyfriend is Hispanic and I have a lot of Italian in my family history.

I also love nature names! My two other children are Cedar and Juniper.

I like the name Elowen, and that name goes great with my other children, but I’m not sure if it would go well with her sister.

So I started looking for other bird names that would go well with Colibri and I found Kotori and Canari. I also like Mariposa which is another Spanish word meaning butterfly. My boyfriend has suggested Navi several times, but it doesn’t seem to go well with Colibri either. Looking for suggestions!! Thanks so much!

Congratulations on your new daughters – how exciting to be expecting twins!

Sometimes parents choose relatively unusual names for a first or second child, but find themselves preferring something more conventional for future children. Often, the world simply catches up to families, with everyone discovering the great names that were once theirs alone.

And, of course, families do opt to go the other way, too, looking farther afield for truly distinctive name choices. You’re in this camp, I think. Cedar and Juniper were once slightly out-there, but now they’re broadly familiar. Juniper ranks #314 for girls. That’s not Emma, but it’s more popular than you might expect.

The names you’ve shortlisted for these babies are the opposite – they’re almost completely unknown.

Colibri was given to fewer than five children in the US in 2017; I found a handful in various records, but really only a few.

The other names you’re considering are similar in terms of frequency:

You mentioned you’re open to new ideas, so let’s see what else we can dream up:

Estrella – The Spanish word for star, of course. I came across it in a book earlier this month, and it’s been on my mind ever since. 282 girls were named Estrella last year, so it’s not common, but not as rare as Colibri. One additional problem: maybe explaining the pronunciation of Estrella would get old, fast?

Evening – In our age of Ava and Evelyn, Evening fits in surprisingly well – even though it’s very much a stand-out kind of name.

Jacinta – Is this too old-fashioned? In the US, I think it would be perfect. It’s the Spanish-language form of Hyacinth. Just 53 girls were named Jacinta last year; Jacinda is rarer still, with only eleven girls born last year by the name.

Lavender – Instantly familiar as a color, seldom heard as a given name – though a minor Harry Potter character answered to Lavender Brown.

Luscinia – From the scientific name for nightingales and related birds. It looks an awful lot like all of those Lou- names we all love so much. And since Lucia works just fine in English and Spanish, I suspect Luscinia would be well received, too.

Millaray – As much as I love this name, it’s not right for many families. But maybe you’re the one! It means golden flower in Mapundungun, the language spoken by the Mapuche peoples. They’re native to Chile and the surrounding area; Millaray has good run in the Chilean Top 100 in recent years, though it’s almost unknown in the US.

Paloma – This name is far more common – and familiar – than Colibri, but I think it fits your general style. It means dove, of course, and was made famous as the name of Pablo Picasso’s daughter, who became a noted jewelry designer.

Pavonine – This is really out-there, I know. A few years ago, someone mentioned that pavonine is the term used to describe a peacock, just like bovine refers to cows and feline to cats. I’ve always thought it had potential as a name … though I’m less certain how it plays in Spanish. (Though isn’t the Spanish work for peacock similar to this term?)

Overall, my favorite of your suggestions – and my favorite overall – is still Mariposa. I think it hits all the marks for an unexpected nature name that pairs well with Colibri, without being too close.

But I like Elowen and Millaray, too, and lots of other names on this list. There are just so many good options!

Readers, over to you – what would you name Colibri’s twin sister?