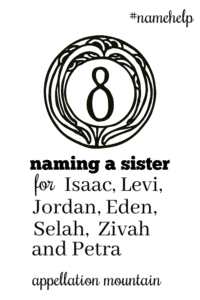 I’m expecting baby #8 in just a few short weeks and having the hardest time finding a name.

We have 2 boys, Isaac Aiden and Levi Josiah.

This will be another girl!

Thus far our trend has been two-syllable first names each beginning with a different letter, and dad prefers something at least vaguely related to the Bible or Hebrew, but none of those are hard and fast rules we must stick with.

A few names we’ve tossed around are Olive, Ruby, Esther, and Noa, and some possible middle names are Louise or Margaret, which are both family names.

Any suggestions would be happily considered!

This makes for a little bit of a name game, doesn’t it? Every time I think I’ve found The Name, I realize it repeats an initial. Or maybe the origins aren’t quite right.

Still, I did find a few that satisfy your requirements and I think that’s the trick – to find a pool of possibilities that you and your husband can consider.

I’ve avoided all names starting with E, I, J, L, P, S, and Z. But I’ve also tried to avoid other -a ending names, even though that’s not a rule of yours at all! It just adds some more options.

Anya – It’s a form of Ann, by way of Russian. That’s a strong link to the Old Testament, as well as the New. And it offers a lovely meaning, too – grace.

Celeste – Maybe this is too much of a stretch, but Celeste comes from caelestis – heavenly. That’s Latin, of course. But the King James version of the Bible, and many other translations, use the word celestial. (Others prefer heavenly.) So it’s not a complete leap.

Chloe – Chloe’s roots are Greek, but the name does appear in the New Testament.

Marie – Okay, I know – it seems like it ought to be really common. Lots of women have Marie as their middle name. But as a given? It’s surprisingly rare. And it connects to Mary – again, far less common than you’d guess – and Miriam, so it’s Hebrew and Biblical, too.

Rachel – I know. Rachel feels a little 90s, a name forever sipping coffee at Central Perk on Friends. Except it’s really quite the classic, an Old Testament name with a long history of use.

Tamar – Another Old Testament name rare in the US today.

Vera – I’ve avoided most -a enders, but Vera is too good to resist! It means faith in Russian and truth in Latin. The latter connects it to lots of phrases, like vera cruz – true cross. So while it misses your requirements for origins, I wonder if it still has the right spirit?

From your list, I love Ruby and Olive – probably because they satisfy your requirements plus have a different ending sound, which seems ideal.

But from my suggestions, I wonder if you’d consider Celeste? It’s not specifically Biblical – and it’s not Hebrew at all – but it feels like it’s in the same general space. Plus, it balances out the rarer names (Petra, Zivah) and the more popular ones (Levi, Eden).

I know the community will have some great suggestions, so let’s turn it over to them.

What would you name a sister for Levi, Isaac, Jordan, Eden, Selah, Zivah, and Petra?