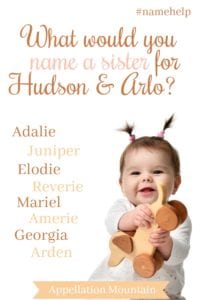 We are expecting our third baby – a girl! She will have two older brothers, Hudson and Arlo.

We have a short list of names, including Ada and Rumer, but I recently came across the name Adalie and would love your take on it.

Adalie strikes me as a gorgeous name. It fits with so many popular choices, from Emily to Everly. And we’ve been choosing three-syllable, ends with -ie and -y names for girls for ages – just ask Dorothy and Rosalie.

I’ve also seen it spelled with an ‘e’ – like the penguin! The French explorer Jules Dumont d’Urville first spotted the birds in Antarctica in 1840. He named them for his wife, Adelie.

At first glance, it’s underused, well outside of the current US Top 1000. Let’s look at the data:

Because Adalie comes from the same roots as Adeline, cousin to Adaline, Adelyn, Adelaide, and so on. All of those Addie names are wildly popular.

If you were looking for more possibilities, I would suggest:

Amerie – Medieval French and English includes names like Amalric and Amalher. Amerie could be a cousin, or it might be a modern invention, a feminine spin on Emory. Either way, it reminds me of Adalie.

Arden – Tailored and literary, Rumer makes me wonder if Arden might appeal?

Devany – I’m never sure how to spell this name. It’s basically Devon with a -y, and it’s rare – but very wearable.

Elodie – An old French name, Elodie is cousin to Otto – believe it or not! It gets lots of love on baby name sites, but remains outside the current US Top 100.

Georgia – If you hadn’t suggested any names, I’d automatically pick Georgia as a sister for Hudson and Arlo. It has the same modern, but not invented vibe.

Juniper – Rumer makes me think of Juniper. It’s a nature name, and a little more familiar, which takes it closer to Arlo and Hudson.

Mariel – Ariel has fared well in recent years, while Mariel remains overlooked. That could make it the perfect stands out-fits in name choice.

Reverie – Reverie makes for a gorgeous word name possibility. A reverie is a waking dream. And sound-wise? It falls somewhere between Rumer and Adalie.

Overall, though, I still think I’d say go with Adalie. My cautions:

Adalie strikes a nice balance between the highly unusual Rumer and the more vintage Ada. It sounds like a sister for Arlo and Hudson. And, with a little bit of repetition, I think others will respond positively to Adalie, too. After all, the fact that it’s easily confused for other names also points to Adalie’s strength: it sounds right at home for a girl born in 2018.

Readers, what do you think of Adalie? Does it work as a sister for Arlo and Hudson?