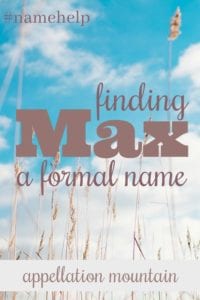 We’re adopting a son we plan to call Max.

In the four photos we have of him, he’s wearing a onesie that says, “sweet dreams Max.” (We didn’t feel right legally naming a baby after a onesie!)

Our late daughter was named Rocket Josephine. For future children, we have the names Viva and Clementine for a daughter and Ezra and Huckleberry for a son, plus we’ve considered Hannibal, Barnaby, Simon, Russell, and Malik. (In other words, we’re all over the place!)

He’ll have my last name, which starts with a J and ends with a -y, so names ending with an ‘ee’ sound probably won’t work, with Lee as a second middle. So First Middle Lee J—y.

We’re both teachers and can’t use the name of any former students we’ve taught. We’d also like to avoid our kid ever sharing a name with a classmate.

We’re not religious at all, so some of these names feel like a lot of Old Testament.

With just a few days to go, we’re bouncing between these formal names for Max:

How exciting to be welcoming your sweet son – and so soon!

I hear a big challenge in your name choices. Teachers often remark that avoiding popular names matters. But how far will you go to give your child a one-of-one, never-gonna-repeat-in-your-class name?

Usually it turns out that parents are content to choose something that avoids repeating the names of the most, erm, memorable students they’ve come across. But that’s no guard against a future student sharing a name with your child.

Because you named your daughter Rocket, I suspect you’re willing to make far more daring choices than most!

Max misses the mark, in that regard. It’s a great name, but there are lots of Max names in the current US Top 1000, several just outside of the Top 100. And yet, it’s as if he told you his name in his pictures! So I’m not suggesting you change it.

Instead, this makes me think that it’s extra important to find a distinctive first-middle combination for his formal name.

Milo – Milo feels offbeat and edgy, but at #224 in the US, it’s actually fairly mainstream. Credit goes to cousin Miles, currently just outside of the US Top 100. But we also love so many -o ending boy names.

Maximilian – At #464, Maximilian is relatively uncommon. (That works out to around 650 newborn boys given the name last year.) It’s a big name, but that’s not a dealbreaker for you. It also leads logically to the nickname Max, which might be a bonus.

Moses – I love the sound of Moses, and I always expect it to be more popular than it is. But at #475, it’s only slightly less common than Maximilian. Of course, it will feel less popular because nothing really sounds like Moses. So in that sense, Moses might be your best bet.

I’m tempted to suggest one more uncommon Max name: Maxfield, as in the artist and illustrator Maxfield Parrish.

But let’s go back to the three you’ve listed. I’d rule out Milo because it’s the most popular. Let’s pair the others with middles to see if that makes a difference:

Moses Alexander – Alexander goes well with Moses, and I think it’s a good combination of the bold and unexpected with the more traditional.

Moses Oleksandr – The Olek- spelling of Alexander tends to be Ukrainian, or maybe Russian or Polish. It’s confusing as a given name, but appealing in the middle spot. Using Oleksandr over Alexander makes the name a touch more daring overall. And so I wonder if this is the best combination for your family?

Let’s have a poll, though, because I’m still more drawn to Maximilian August and Moses Alexander – but I’m not sure if that’s the right direction for your family!

Over to you, readers – what formal name would you choose for Max? And do you have any advice for teachers seeking a more distinctive name for their child?