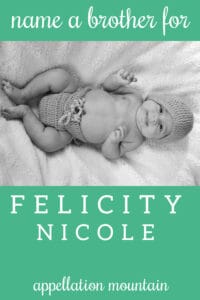 We have a daughter, Felicity Nicole. We chose her name in about ten minutes, right after we found out we were pregnant with a girl.

Now I’m due with a boy in October, and it feels like we keep adding and adding names to our list, but nothing is right.

So far we have:

Every time we talk, we add more names to our list! Can you help us move in the other direction?

Here’s what leaps out at me: Felicity Nicole is something of a lacy antique. It’s traditional, in the sense that we’d accept it as a name from an earlier era. (Though the numbers tell us that it’s far more common today than ever before.) It’s not a rock solid classic like Elizabeth, but it’s also not a modern invention, like Everly.

That makes me wonder if your boys’ list shouldn’t match that style – a contemporary favorite that feels like a vintage gem?

Felix is an obvious name from that category, but I wouldn’t recommend siblings named Felicity and Felix. It’s too much like, say, Robert and Roberta or Jack and Jacqueline.

But several names on your list that stand out. Rather than adding more options, I’ll try to pinpoint the ones that feel most like Felicity’s brother.

Though with the exception of Felix, I think any of these names would be great for your family. So I completely feel your struggle!

I’ll pick just four that I think might be the best of the best.

A BROTHER FOR FELICITY

Like Felicity, Everett sounds like a blast from the past. And it was used regularly in the late nineteenth and early twentieth centuries, spending many years in the US Top 100. That makes it another vintage choice with plenty of appeal now.

I could say nearly all the same things about Miles that I did for Everett. Except it’s shorter, and maybe a little bit jazzier, thanks to Miles Davis.

Probably the name that leapt off the list first! The only possible drawback is that the world is packed with Olivias and Olivers, so maybe you’ve already met a few? Style-wise, it’s a perfect match for Felicity, but it’s definitely more popular.

A New Testament name, and a nineteenth century literary one, too, thanks to George Eliot’s Silas Marner, this is a name that feels borrowed from the past. But it has plenty of modern energy, too, particularly thanks to the meaning – forest or woods – that puts it in the company of nature names like River and Bear.

I think I’d make a final decision based on the middle name you most want to use. Stephen seems like a clear favorite, and I think Everett Stephen could be great. Or maybe Miles Joseph?

Readers, over to you – what would you suggest as a name for Felicity Nicole’s new brother?