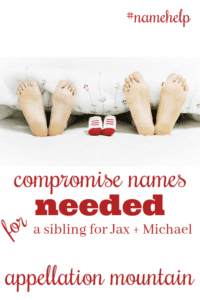 I am wondering if you could help with some fresh name suggestions for our third little munchkin.

Our first two boys, John Alexander (Jax) and Michael Peregrin ended up with very traditional first names because that was the only common ground my husband and I had. As soon as I mention a name I like, usually an old name with the potential for a comeback, he seems to have peers he doesn’t want to remember with that name.

Apparently they are either ahead or behind the times as far as naming trends in South East Asia where he was born. Names used 100 years ago here were used 30-40 years ago there.

I would like to find a three syllable name (because baby is the 3rd) that we can both agree on. We also want to avoid names that end in O so they don’t rhyme with our family name.

For girls, we had agreed on Eliana if either of our sons had been girls, but now I know a couple of girls with similar names. We also both like Abigail, but there are quite a few young Abigails here, too. Other names on my list include Leora (he hates it), Vivienne, Eleanor (an honor name), and Adelaide … but none of them are jumping out at me yet.

You’ve found great names for your boys that stick mostly to the classics, but add an unexpected twist – Jax’s cool, modern nickname; Michael’s unexpected middle. I’m confident that we can think up something similar for your newest.

The biggest challenge, I think, is finding names that don’t strike one – or both! – of you as hopelessly dated. When one partner has a completely different set of cultural references, it’s not unusual for common ground to be a bit harder to find.

I’m tempted to suggest Ezekiel and Zachariah and Barnaby. They seem like they’re too vintage for your husband – and yet, if his favorite is Benedict? I suspect it’s still possible that the right name will appeal to you both.

Instead, I’m going to see if I can find something slightly less common than Michael or John, but still compatible with Jax, too.

Bennett – If he loves Benedict and you like Benjamin, is another Ben- name an option? Bennett seems more modern than John Alexander and Michael Peregrin, but still compatible with Jax and Michael, and a nice balance between traditional and fresh. A bonus? Bennett ranks #123, which seems like a slightly less common choice that still isn’t out-there.

Dominic – Dominic is sometimes dismissed as Italian, but that’s really not the case. It’s a pan-European name, made famous by a saint, but not expressly religious. I think the potential nicknames – Dom, Nico, Nick – and the three-syllable count. At #74, it’s popular, but not everywhere. And it seems likely to appeal to someone who likes Benedict, too.

Ezra – Did your husband know anyone named Ezra growing up? I think it has lots of potential. It’s traditional, but with an edgy, offbeat sound. It currently ranks #69, which is plenty mainstream. But you’re unlikely to run into many adult Ezras. (Actor Ezra Miller is all of 26!)

Forrest – For some parents, Forrest Gump is a dealbreaker. But there have been plenty of other Forrests, first and last name, like Forest Whitaker. And in our age of nature names, like River, and surname picks, like Mason, Forrest fits in wonderfully well. At #596 in the US, it’s familiar – but not too common.

Giles – My first thought was Miles, but Michael + Miles seem awfully close together. Giles swaps the M for a G, but retains all the same style and sound. But it’s much less common – while Miles is a comfortable #110, Giles last appeared in the US Top 1000 back in the 1950s! Still, it seems like a fit with Jax and Michael, and has a similar style to Benedict, too.

Malcolm – I can imagine brothers named Malcolm and Benedict. It has that same sort of old world vibe. But I think it goes with Samuel, Benjamin, John, and Michael nicely, too, because it’s clearly a traditional pick. Malcolm ranks #395, which seems way too low. (Seriously – more boys were named Iker, Ace, or Colt last year!) But that’s a good thing – it means everyone recognizes it, but your son will rarely have to share his name.

Raphael – Raphael is a great, underused, traditional boy name. And Rafe? It’s an upbeat, dashing kind of short form. At #282, Rafael is more popular than #519 Raphael. Either spelling works, though the ‘ph’ version strikes me as closer to the other names on your list.

Roman – Roman brings to mind the eternal city, but ties to Italy are not required to use this handsome name. It’s strong, distinctive, and, at #91, popular but not over-used.

Simon – Samuel and Orion make me think of Simon, and I know brothers named Benedict and Simon, so it seems like an obvious choice. It’s as traditional as Michael and John, but not nearly as common. At #263, I’d say it’s more popular than it was in the 1980s or 90s, but you’d never call it a trendy name.

Of all of these, Dominic, Raphael, and Malcolm are my favorites, but only Dominic and Raphael satisfy the three-syllable requirement. I’d say that pushes Raphael to the top of my list. Except as I write that, I feel a pang – because I can easily imagine a third son being named Giles or Simon, too!

Eliana is a frilly, elaborate, and almost modern name. Eleanor, Adelaide, and Abigail are much more tailored, though every bit as feminine. I’d put Vivienne and Leora somewhere in between. Any of them could be sisters for Jax and Michael, though, so I’m not sure we can rule out any of them just yet.

One thing that leaps out? They’re pretty much all three-syllables, though, of course, Eliana is even more elaborate.

Caroline – Classic Caroline ranks #55, and yet you really don’t hear it all that often. It seems like a great alternative to Eleanor and Adelaide, a logical sister name for Michael and John.

Elena – Elena feels like a slimmed-down version of Eliana, though they’re not actually related. Elena is a form of Helen, which is sometimes considered a (distant) cousin to Eleanor, so I wonder if it appeals for that reason, too. At #67, it’s relatively popular, but far from, say, Sophia levels.

Eliza – If not Elena, maybe Eliza? The name started out as a short form of evergreen Elizabeth, but feels a little bit spunkier and more energetic. The name ranks #140, which makes it a sweet spot name for girls.

Juliet – Juliet feels romantic – how could it not? But the -et ending is a little more tailored than, say, Juliana. So I think it fits with the Eleanor-Adelaide-Abigail part of your list. The spelling Juliette is actually more popular than Juliet at the moment, with the -ette coming in at #207, versus -et at #226. That’s still not too terribly popular, though.

Louisa, Lucia – What do you think of a longer Lou- name? These two names claim different roots, but they have a similar sound. Literary Louisa ranks #752 – shockingly underused! – while Lucia comes in at #185. One possible reason to prefer Louisa: Lucia is often pronounced loo SHAH, with just two syllables instead of three. But plenty of other families do say it more like Julia, so it could work.

Rosalie – Rose feels as spare and classic as any name can be, an elegant choice. Rosalie feels a little more spirited, a vintage choice with a lot of kick. At #236, I think it hits the right note on the familiar-not-common meter.

Sabrina – Sabrina sounds like a name that should be on top of the charts right about now – after all, we’ve long loved Sophia and Brianna. Instead, it enjoyed a tiny burst of popularity in the 1990s, and has since faded to #434. But it’s still instantly familiar, a literary name with a mix of pop culture associations, from Audrey Hepburn’s glam Sabrina in 1954 to the Teenage Witch, currently rebooted in a much spookier form on Netflix.

Overall, I love Sabrina for you – it strikes me as the kind of slightly off-center pick that goes with Benedict and Orion. But if moving to the middle helps, then traditional Eliza would be my favorite for Jax and Michael’s sister.

But now, over to the readers: what would you name a sister or brother for John “Jax” Alexander and Michael Peregrin?