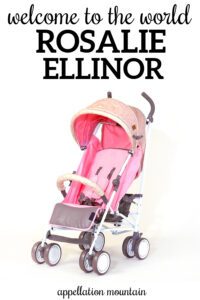 UPDATE: She’s here! Welcome to the world, Rosalie Ellinor. Lexi says, “We had almost made up our minds to call her Elliott, but it never right. After reading the comments here again, I found myself drawn to Rosalie. My husband agreed! We settled on Ellinor as a little bit of a connection to Elliott, but if we do have a son someday, I think we’d still feel okay naming him Elliott. It feels like a good compromise. Thank you so much to everyone for your help!”

We have two daughters, Charlotte Claire and Josephine Grace, and we’re due with another girl before the end of the year.

Charlotte was my favorite name since childhood. Claire was my husband’s pick, but when we met her, he agreed she looked like a Charlotte! It’s a little disappointing that the name is so popular now, but we still don’t know any other Charlottes.

We didn’t have a favorite girl name for Josephine, but Joseph was a possible middle name for a future son, because it’s my grandfather’s name, my husband’s dad’s middle name, and my husband’s oldest friend. Grace was just another name we liked.

For this baby, I like Louise, but my husband cannot stand the “wheezy” sound. We’ve talked about Evangeline, but I don’t like the way it’s sometimes pronounced -leen, -lynn, -line. (I’m not even sure which one I like best.)

Katherine is my niece’s name, and I think it’s not quite right anyway.

Names ending with -a are mostly out, because I don’t like the way they sound with our Italian last name: D-Luc@.

We’ve been saving a boy name ever since Charlotte. Elliott is my maiden name, and I love it for a son. Now I’m wondering if maybe we should use for our daughter? It doesn’t feel like a girl’s name to me, but I don’t like the idea of never having an Elliott. This might be our last baby, but maybe not.

Our preference is that our kids don’t use nicknames, but I realize that they might choose to do so. I just want the name to be “complete.” I’m Lexi, not Alexandra/Alexis/etc. and I hate being asked what it’s short for.

Naming is one of the very few parenting responsibilities that gets harder as you gain experience, right?

It sounds like we’re looking for a longer girls’ name with a certain tailored quality. And while you’ve already used two great choices, there are lots of options in this category.

The bigger question is really about Elliott, I think.

You’re open to growing your family, so it’s not completely unreasonable to save Elliott for a son.

But you’re not absolutely certain that a fourth child will be in your future, either.

And yet, Elliott for a girl doesn’t really seem like your style. Charlotte, Josephine, and Elliott sound like two girls and a boy. There’s no reason Elliott can’t be their sister! But if you were inclined to use Elliott for a girl, maybe you already would’ve done so?

One compromise might be to choose another El- name. They don’t necessarily rule out naming a future son Elliott, but might take some of the pressure off to use that name.

Or not! After all, Eleanor and Elliott would be pretty close as sibling names.

Still, if you like the idea of using an El- name, I’ve added a few suggestions to this list. I’ve also avoided the US Top 100 – which is Eleanor isn’t actually on this list. But I don’t think that you have to stick to that rule at all!

A SISTER FOR CHARLOTTE AND JOSEPHINE

Classic Anne meets stylish Belle. Or, more likely, the medieval Amabel is misunderstood as Anne+Belle. Either way, the result is an enduring name with just the right amount of vintage charm.

All the charm of Elisabeth-with-the-s, none of the spelling drama. Except … is the wheeze too much here, too?

Gabrielle peaked in the 1990s, meaning you’re more likely to have a babysitter than a daughter named Gabrielle today. And yet, I think it might be exactly what you’re after.

French and refined, but with plenty of spirit, Genevieve sounds just right with Charlotte and Josephine.

The -ette spelling is more popular than Shakespeare’s Juliet, but either way, it feels like a perfect sister name.

You’ll have to spell it. And yet, sophisticated and approachable Marianne is a great, underused choice for a daughter.

The first name that came to mind! As gently French as Charlotte and Josephine, with the same tailored appeal.

Overall, I think my favorites are Genevieve and Vivienne. I like the way they’re slightly French, but work effortlessly in English. And pronunciation seems like less of an issue than with Evangeline.

But I know our readers will have more suggestions, so let’s open it up.

Readers, what would you name a sister for Charlotte Claire and Josephine Grace?