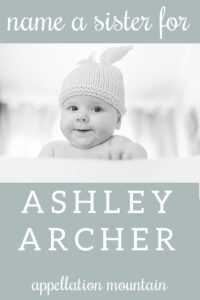 As a child I loved the book series “The Famous Five” by Enid Blyton, and was especially drawn to the character of Georgina, a strong and fiery girl who insisted on people calling her George. I fell in love with the idea of a spunky girl with a “boy” name, and for as long as I can remember planned to name my future daughter Ryan or James.

But I was destined to have a boy first. My husband and I were truly stumped on boy names until someone suggested Asher – it was close, but not quite right. But what about Ashley?

I immediately fell in love. Ashley felt classic – traditional, but fresh and surprising. A male Ashley would be smart, sophisticated, handsome, and kind. Adding the family (and masculine) name, Archer as a middle name sealed the deal. People are always caught off guard by his name, and I love watching them come around to it. It suits him perfectly.

Now I am pregnant with Ashley’s sister, and I think it would be unfair to give her a “boy” name and sentence the siblings to a lifetime of people confusing their names. You may think that a name with a “boy” nickname could work (like Charlie for Charlotte) but my husband and I are just not drawn to common or feminine names.

We want a name that is as surprising and unique as Ashley, but that is as strong and feisty as we know this little one is.

Sloane has been the top contender, but I’m just not fully committed – I think because I worry it is not as unique as Ashley. It’s in the Top 200 girl names, after all.

I’ve recently been thinking about Adair – it sounds lovely with Ashley, but I’m not sure my husband will think it as strong as Sloane. Perhaps Campbell? Ash and Bell sound sweet together.

Bonus points for a name that works with the middle name Whimsy. A surprising suggestion from my husband with such offbeat English aristocratic charm that I haven’t been able to forget it. I also appreciate the alliteration with our surname, a one-syllable name beginning with W.

Double bonus points if it works – or at least doesn’t sound awful – in French!

Ashley Archer is a handsome name. It sounds like a nineteenth century gentleman and a twenty-first century boy, all at the same time.

But it does create a puzzle, doesn’t it? If I hear Ashley and Ryan, I immediately assume they are the opposite genders. (And perhaps the parents, rather than the children – Ashley peaked for girls in the late 1980s, and Ryan a few years earlier, so peak mom and dad names right about now.) There’s nothing wrong with that necessarily … but I can see it’s potentially awkward.

Let’s take a step back and think about Ashley’s name more broadly:

So maybe the trick is this: find a surname-style name that’s equally rare, every bit as difficult to pin as masculine or feminine and possibly offers a conventionally feminine nickname, too.

In other words? Adair is perfect.

It’s never appeared in the US Top 1000. While it’s derived from Edgar, it doesn’t feel strongly masculine or feminine. Potential nickname Addie makes it even more accessible, just like Ash for Ashley. As for strength? The “dare” sound is right there in the name. Adair sounds like a tightrope walker or an alligator tamer, while still feeling polished enough to belong to a surgeon or an academic.

But if you need some other suggestions …

A SISTER FOR ASHLEY ARCHER

BELLAMY – Campbell is great! Bellamy also leads to Bell and because it’s the first syllable, maybe it’s even more obvious?

ELLERY – It just doesn’t make sense that Ellery is so rare, not in our age of Elliott and Ella. But it is quite uncommon.

GREER – Originally a contracted form of Gregory, Oscar-winning actor Greer Garson put this name on the list of possibilities for girls, too.

LAINE, LANE – My first though was Lanier or Lainier, but Americans tend to pronounce it lah-neer, which seems less appealing. But Lane and Laine have plenty of potential. While Lane ranks just above the current boys’ Top 250, it feels unisex. The spelling Laine seems more obviously feminine. And Lainey ranks around #350 for girls.

MARLOWE – In our age of Harlow and Margot, Marlowe seems like it ought to be more common. But it isn’t, and I think it’s an obvious substitute for Sloane.

THAYER – The TH sound is back. Just ask Theo and Thea. A cousin to Taylor, Thayer occurs less often as a last name – and very seldom as a first.

WALLIS – The late Duchess of Windsor makes this surname name just feminine enough, and perhaps slightly retro. (She was born Bessie Wallis Warfield.) But now that the scandal has faded into history, it leaves Wallis as an appealing choice – tailored, flowing, somewhere between Alyssa and Willa. Except then her initials would be WWW, which might be WAY too much. Or not …

AN OLD-FASHIONED NAME FOR ASHLEY’S SISTER

Another key quality to the name Ashley? It’s nicely old-fashioned, a name that could be riding a horse in shiny boots and a fancy coat. Maybe an old-fashioned girls’ name – one with a sparky, high-energy nickname – would work, too?

CECILY – Cecilia is pretty mainstream, but Cecily – the medieval English version of the name – has never quite caught on. It’s lacy and feminine, but nickname Cece/Ceci is bright and energetic.

GEORGETTE – Are you sure you want to let go of your original inspiration? Georgette called Georgie – or Gigi or Jett – seems like it hits the same style category as Ashley.

LOUISE – I mentioned Louise only because nicknames Lou, Lula, and Lulu are all so, so good.

THEODORA – I know you don’t love Charlotte-called-Charlie. But how ’bout Theodora called Theo, Thea, or Teddy/Teddie?

ASHLEY’S SISTER SHOULD BE …

I really cannot beat Adair. I think it’s The Name!

But Georgette, with all those nicknames, seems like a dark horse candidate, worthy of consideration.

If we stick to the surname category, I think Marlowe and Laine/Lane are the best alternatives to Sloane – strong, less common, very wearable, and just as unisex.

Readers, over to you – what would you name a sister for Ashley?