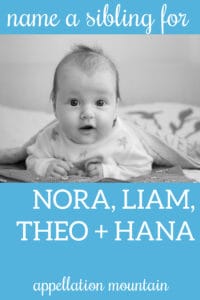 My husband Ryan and I discovered a pattern with our family’s names after baby #2. We all have four-letter, two-syllable names. Maybe we’re slow but we didn’t notice until we were discussing Theo or Theodore for our third child. My best friend was the one who pointed out why it had to be Theo!

Hannah was our runner-up name for Nora. When our fourth was a girl, we changed the spelling to Hana so it fit.

Now we are expecting our fifth and probably last baby. (Though we said that with Hana, too, so never say never!)

We want another four-letter, two-syllable name.

Some names that we like don’t work because they rhyme/almost rhyme: Anna and Hana, Leah and Liam (initials anyway), Thea and Theo, Lara and Cara, Maya and Ryan.

For boys, we like Owen, but our neighbors have a baby Owen. My husbands says it’s fine, but I don’t want to be accused of name stealing.

This baby’s middle name will probably be either Joy for a girl and Andrew for a boy.

Let’s start with a truth of naming in bigger families: something has to give.

You can avoid repeating an initial. You can probably find another two-syllable, four-letter name.

But ruling out every name that belongs to another child you know? That’s gonna make this difficult. Like, instead of PhD-level difficult, we’re talking Nobel Prize-winning levels of complexity.

Which is a long way of saying that, if this baby is a boy, I think his name should be Owen Andrew.

IT’S NOT NAME STEALING BECAUSE …

Let me add this: it’s lovely to be thoughtful and considerate about repeating names.

After all, every parent knows how frustrating it can be to realize that The Name we spent nine months crafting is now at the top of every popularity list. Or worse, it’s still not that common, but a dear friend just gave the name to her new baby.

But here’s why I think Owen works for your family:

But even if you’re closer than I’m imagining, or less likely to move than I think, well … this is your fifth child. Avoiding all duplicates would be tough, even if you didn’t have specific rules for choosing a name.

But I can imagine the following scenario: you name your son Ezra to avoid duplicating a name. Owen’s family moves away. Your new neighbors move in, and their son? He’s named Ezra, too.

A SISTER FOR NORA, LIAM, THEO, and HANA

We clearly need to do some work to find a sister name for Nora, Liam, Theo, and Hana. Would you consider …

Strictly speaking, it’s a Slavic/Scandi form of Anna. I don’t think that’s obvious in American English. Instead, Anya sounds like a just slightly different name, with a similar old world quality to Nora and Hana.

The Garden of Eden is, well, ancient. But it’s only been used a given name in recent generations, which gives it a mix of Old Testament backstory with modern sound.

I’m guessing you may have considered Emma at some point. In any case, it’s very popular … but I only know two. (And they don’t know each other.) It’s a strong, classic name for a daughter, and sounds great with Nora and Hana.

Or maybe you’d rather try something a little more daring? Literary Esme has a long history of sparing use, a great meaning – beloved – and is just familiar enough to be wearable.

Maya is a little close to Ryan. Would you consider Mila instead?

Like Nora and Hana, Vera is brief and complete. It also offers two appealing meanings: faith and truth.

Overall, my favorite is probably Vera.

But I wonder if Mila might be more your style?

Readers, over to you! Do you agree with me about Owen? What would you name a sister for Nora, Liam, Theo, and Hana?