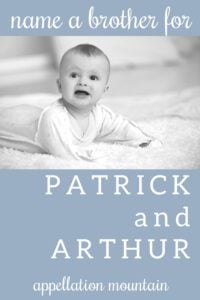 With our oldest, Patrick James, we decided pretty much instantly after learning that he was a boy that we’d name him after my late dad. We have other family members with the middle name James, so it felt like we were including lots of people with one name. Plus he would have options for nicknames and it wasn’t in the top 100 of social security name popularity.

We were starting from scratch with baby #2. I scoured lists, checked Social Security data and finally stumbled across Arthur. We decided on Arthur for similar reasons to Patrick, not too popular but still common enough, had nickname options. We wound up with the middle name Leo to honor my husband’s maternal grandfather who was Leon, and my mom’s middle name is Lee, so Leo felt like a nice middle ground.

Which leads us to boy #3. We’ve been looking at lists and just taking in names from everywhere but nothing has really clicked the way it did with the other boys. There are names that we like (Franklin, Edward) but we don’t feel confident in them the way we did before. We’re definitely open to going into the hospital with a list and deciding after meeting the new guy, but we’re surprised that it’s been so much harder this time.

We obviously like older names, and it’s cool that they’re becoming more popular, but anything in the top 10 is definitely out for us. My husband is Nick and was one of about 6 in his grade at any given year and hated having to use an initial, so not being too popular is important to him. We also like the option for nicknames.

I’m sure I’m forgetting something, but I really do appreciate the help!

I completely know what you mean – we could name one boy, easy. Maybe a second.

A third? That would’ve been tough!

It becomes challenging to match all the great qualities in your sons’ classic, underused but immediately familiar, names.

But it can be done!

I wonder if one of your challenges is a subtle difference between Patrick and Arthur.

Both feel like rock solid classics, meant to stand the test of time. And yet … Patrick is a former favorite that has graduated to traditional, but underused status.

They’re perfectly compatible as brother names, but I hear a little bit of the same contrast on your maybe list.

Edward fits with Patrick. We all recognize it immediately and no one would blink to meet a little Edward. But it’s very different from Franklin, a name that feels like a recent revival.

Does that make sense? Because I might suggest a name like Felix or even Cedric for Arthur’s brother, but not necessarily for Patrick.

I’ll split the difference for my list of suggestions.

One note: I’m also going to quietly ignore your Top 100 is out rule. While I think it’s an excellent guideline, and definitely describes the type of name you’re after, I’m wondering if it rules out a few names that could otherwise be perfect fits for your family.

A BROTHER FOR PATRICK and ARTHUR

On paper, Anthony is popular – too popular for your preferences. And yet, names have changed so much in the last twenty years. And it’s a trend that promises to accelerate. Distinctive, classic names like Anthony feel rarer, even as popular favorites like Jayden (#37) and Jaxon (#48) seem more common. And while an earlier generation automatically called every Anthony Tony, that’s no longer the case. Your Anthony could be Tony (or Ant), but it’s handsome in full, just like Patrick and Arthur.

Like Arthur, George has gotten a little lift in recent years. Yes, there’s the prince. But even without a headline-friendly royal, it was simply time for George to make a comeback. And while George feels nickname-proof, Georgie and Geordie are traditional go-tos. And Jory, the Cornish form of George, seems like a logical nickname – even if it’s not obvious to English speakers.

Like Patrick, Philip is one of those traditional boys’ names stuck in style limbo. It’s a little complicated by the one L or two question. (In brief: Phillip dominated during the twentieth century. Philip is more popular today, but the difference is not significant.) Besides Phil, there’s Pip and Flip for nicknames. But Philip in full is very wearable.

There are Hugos in the history books stretching back centuries. French author Victor Hugo is one; former US Senator-turned-Supreme Court Justice Hugo Black is another. It’s equal parts cuddly and storied. You could also choose just Hugh, but I think Hugo might be the slightly more stylish choice, and I like the rhythm of Patrick, Arthur, and Hugo better, too.

Okay, Miles probably isn’t The Name. Except … it’s traditional. (Myles Standish, of course!) And it’s ranked in the US Top 1000 every year since 1880, when data is first reported. But it’s also a stylish name, in the Top 100 since 2018 and continue to gain. But Miles mixes all that Plymouth Rock early Americana with the jazz of Miles Davis and the energy of Miles Morales, a new(er) Spider-man.

Thoughtful and smart, Simon is one of those names hiding in plain sight. We all know it, but seldom choose it – just like your older boys’ names. It’s heard in nearly every European language, across cultures and continents.

As with Philip, there’s a spelling question. At #224, Steven is actually more popular. And again, either version works. One possible hitch: Steph Curry, of the Golden State Warriors, pronounces Stephen more like Stefan. That might make the name even more appealing … or not. But Stephen/Steven fits in nicely with so many boys named Dylan and Logan and Aiden, a timeless choice.

Full disclosure: I’m not wild about Tim. It’s somebody’s dad or maybe my accountant. But Timothy? Timothy, used in full, is great. It’s like Anthony. Or Gregory, a name that feels surprisingly fresh and modern when it’s not shortened to Greg. And Tim has grown on me, especially since a friend named her son Timothy. (He’s too little to be Tim, but Timmy really sounds sweet.)

The first name that came to mind, and still my favorite with Patrick and Arthur. It’s got a great meaning, history to spare, and an appealing mix of notable bearers. (I mean … Vincent van Gogh!) I always thought Entourage – featuring the fictional movie star Vincent “Vince” Chase – might give the name a bump. But it didn’t happen, leaving Vincent an under-the-radar option for a son.

Vincent was my first thought, and remains my favorite. But I wonder if Hugo isn’t an even better option. It lacks a little bit in nickname options – Huey feels inevitable, but I’m not sure it appeals. But if you’re willing to reconsider the Top 100, Anthony might be worth a thought.

Readers, what would you name a brother for Patrick James and Arthur Leo?