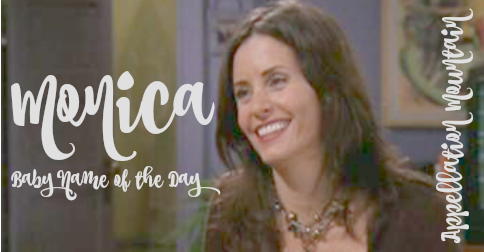 Monica is a saint, a singer, a Friend, a scandal.

Thanks to Allie for suggesting our Baby Name of the Day. The historical Monica was a fourth century woman, the mother of Saint Augustine. She was a Christian, but her husband was not, and he forbid his wife to raise their children in her faith. Many years later, Augustine converted, penned his famous Confessions, and sung his mother’s praises throughout his work.

Because she was probably a Berber, the name’s origins are likely North African, possibly Phoenician. Over the years, it has become associated with the Greek monere – to advise – as well as the Greek monos – alone.

The saint remained popular over the centuries. Her relics were moved to Rome in the 1200s, and can still be visited today.

The name seems to have been neglected, at least in English, through much of the Middle Ages.

Anthony Trollope chose it for a character in his 1858 novel Doctor Thorne. His character wasn’t very nice, but I suspect he gets credit for the name’s revival anyhow. The name was in use in small numbers by the time the US Social Security Administration started reporting data in 1880.

Then came May Lewis.

Miss Lewis started out as a singer on a radio show in the late 1930s, dropping her birth name for a more glamorous appellation. She quickly graduated to her own show, Monica Makes Music. The name was slowly catching on, given to fewer than 300 girls every year in the 1930s. She was interviewed by the New York Times, so presumably her show was reasonably popular.

And the name did begin to rise, especially after Miss Lewis joined Benny Goodman’s orchestra in 1943 and made even more frequent radio appearances as “America’s Singing Sweetheart.” In 1948, she was a guest on the very first Ed Sullivan Show, and by the 1950s, she landed roles in movies and would continue acting through the 1970s. But she’s best remembered as the longtime voice of Chiquita Bananas. 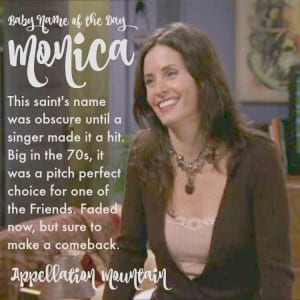 That made it the perfect choice for one of the fictional Friends. Monica Geller was the hard-working, level-headed mother hen of the 20-something crew, played by Courteney Cox.

In real life, Monica Lewinksy would have been a few years younger than Geller. The former White House intern rose to infamy after her affair with then-president Bill Clinton was exposed.

I think that’s exactly enough to leave the scandal in the past, and to help reclaim this name. Saintly, storied, and worn by a great many women, this name is properly considered an underused classic.

What do you think of Monica? Is it dated? Still tainted by scandal nearly twenty years later? Or ready for a comeback?