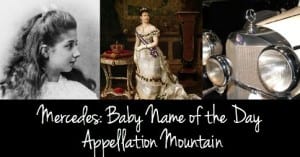 Long before the luxury automobile, this was a virtuous name for a daughter.

Thanks to Elizabeth for suggesting Mercedes as our Baby Name of the Day.

Catholic readers might immediately recognize Mercedes as a title of the Virgin Mary.

It’s not clear when the name was first given to girls, but it was used by the 1800s.

The first wife of King Alfonso XII of Spain was born Maria de las Mercedes. She died young, and the king soon remarried. With his second wife, the king welcomed a daughter in 1880, also named Maria de las Mercedes. Maria wasn’t just a princess. She was heiress presumptive to the Spanish crown, until the birth of her much younger brother, who would become Alfonso XIII.

It’s also the name of a character in Alexandre Dumas’ 1844 novel, The Count of Monte Cristo. She’s the beloved of Edmond Dantes, Catalan by birth. Dantes is wrongly accused of a crime as the novel opens and spends the rest of the story seeking revenge. 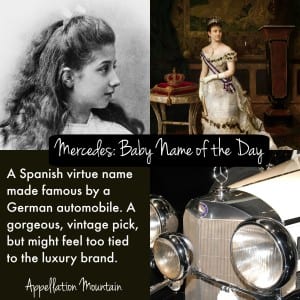 It’s not clear how Vienna-born Mercedes Adrienne Ramona Manuela Jellinek got her Spanish name. Emil Jellinek and wife Rachel welcomed their daughter in 1889 in Vienna.

We do know how her name ended up on the Gottlieb Daimler and Carl Benz automobiles, though.

Back in the late 1880s and 90s, Daimler and Benz were forming automobile companies. Emil Jellinek was an early automobile enthusiast. He bought his first Daimler in 1897, and quickly  helped to promote the cars – famously insisting that the company make them faster. Jellinek raced the cars internationally, under the team name Mercedes, in honor of his daughter.

By 1900, Jellinek was investing in the company, with the stipulation that the new engine be known as the Daimler-Mercedes. By 1901, the new automobiles were winning every race, and the cars were selling out. A year later, the company officially registered Mercedes as their trade name, and the cars have been known by the name ever since.

The Benz motorcar company merged with Daimler in 1926, and that’s the rest of the name: Mercedes-Benz.

As for Miss Jellinek, it was no secret that her name had inspired the brand. Her image was displayed on posters by her proud father, who became known as Emil Jellinek-Mercedes. A handful of other pop culture uses include:

None of it quite explains how the name became so popular in the 1990s. Perhaps it was boosted by Spanish-speaking families. Or maybe the luxury brand gets credit. Chanel was also on the rise around the same time.

Overall, Mercedes has history aplenty that goes far beyond the Autobahn. If you’re after a Spanish-language choice with rich meaning and history, this is one to consider.

Would you consider Mercedes, or do you think this name is too connected to the cars?