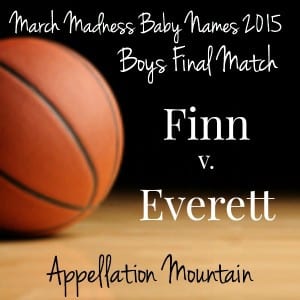 I cannot believe it, readers! March has gone by like a flash, and it’s already time to vote in the final round of #marchmadnessbabynames!

Let’s not delay … time to decide who takes home the trophy!

How to choose between these two?

Voting will remain open until the morning of Friday, April 3, with the winners announced on Saturday, April 4th.