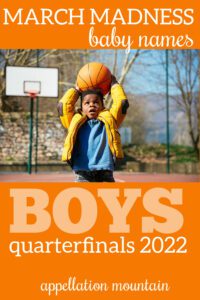 The first round of March Madness Baby Names 2022 for the boys is over.

With the first eight match-ups in the books, it’s time to look back. Every year, this round brings a mix of surprises and upsets, along with a certain number of predictable(ish) outcomes.

How did your favorites do?

As usual, I had my predictions for a likely winner of the year’s contest. So far, my top pick is still in competition. But we’ll see! Sometimes the match-ups matter. Huxley could’ve beat many of the names on this list … just not Wilder. It’s just like that other March Madness contest, the one with the basketballs …

And, of course, that means it’s time to vote once more.

Polls stay open until Thursday, March 17th. Come back on Saturday, March 19th to see which of your favorites win! And, of course, to vote in the next round.