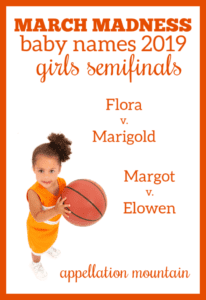 Your votes are in, and four names have been narrowed to just two in this year’s installment of March Madness baby names.

Before we get to the next round, let’s look at the results of the QuarterFinals:

Overall, this round gave us no stunning upsets. And that’s to be expected! It gets harder and harder to choose as the contest progresses – just like any good contest, right?

This week’s SemiFinals should prove to be even tougher still. I have my guess about which name will win the whole tourney at this point – but I’m prepared to be wrong.

Flora was a Top 100 staple in the late nineteenth century, but hasn’t been ranked in the Top 1000 for nearly fifty years. Meanwhile, Marigold has yet to chart. Both have risen in use in recent years, though, so perhaps it’s time for a comeback – or a discovery – of these flourishing choices.

Here’s an intriguing fact: all four SemiFinal names claim a connection to the natural world. Flora and Marigold are clearly flower names. But Elowen is the Cornish word for elm tree, and Margot comes from Margaret, which means pearl, while the French form, Marguerite, is also the word for daisy.

Margot may be vintage, and Elowen recently coined, but both have a modern sensibility – feminine, but unexpected, too.

Polls will remain open through Thursday, March 21st. Please check back on Saturday, March 23rd to see which names advance to the final round, and, of course, to vote once more!