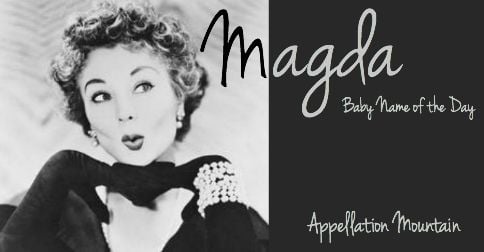 Our Baby Name of the Day is rare in English, but far from unknown.

Thanks to Sarah for suggesting Magda as our Baby Name of the Day. In English, Magadalena – as in the New Testament’s Mary Magdalene – became the softer Madeline. As of 2014, Madelyn is the dominant spelling in the US.

But plenty of European languages, from Spanish to Norwegian to Czech, have kept the name much closer to the original Magdalena. And so the short form is obvious: Magda.

The Biblical figure took her name from her hometown, Magdala, on the sea of Galilee. The town took its name from a Hebrew word meaning tower. Mary Magdalene was a disciple of Jesus, and a witness to both the crucifixion and the resurrection.

She’s been a popular saint for ages, so no surprise that Magdalena has enjoyed a long history of use throughout the Christian world.

Famous Magdas are few in the US.

In the nineteenth century, Danish-born actress Magda von Dolcke made a splash in Sweden and won the heart of the Swedish king. But I don’t believe she ever ventured across the Atlantic, and for much of her career, she took the stage name Rosalinde.

Magdolna Gabor answered to the nickname. Magdolna was the eldest of the Gabor sisters, and not nearly as well-known as her sisters Zsa Zsa and Eva. But she did make several appearances in movies and television, and, like Zsa Zsa and Eva, was quite the well-known socialite.

In pop culture, Americans tend to use the name to signify a much less glamorous character, often from Eastern Europe. Think of Miranda’s nanny on Sex and the City, or Mary’s heavily-tanned neighbor in There’s Something About Mary. Both characters answered to Magda.

You might also think of Magda Szubanski, the Australian actress who played the farmer’s wife in Babe, and has had a long career on Australian television.

But there are others who take the name in a different direction.

A 1966 first season episode of Star Trek included a femme fatale by the name.

In 1983, the James Bond movie Octopussy featured a gorgeous henchman named Magda. She was played by Swedish actress Kristina Wayborn.

Marion Zimmer Bradley also used the name for a character in her Darkover series. 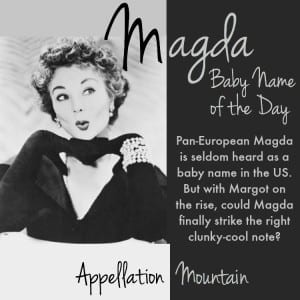 It’s difficult to say how many women have answered to this name over the years. It isn’t traditionally bestowed as an independent name.

As of 2014, there were just eleven newborns given the name.

That’s probably in part because the name has never been very familiar in the US, and partially because American parents prefer their names smooth these days. Think of favorites like Mia and Mila and Amelia.

But there are signs that crunchier names are ready for a revival.

Magda fits right in with names like Margot and Marjorie, both fast-rising choices.

If you’re after something distinctively different, European in feel, and with a clunky-cool vibe, Magda could belong on your shortlist. With built-in nickname Maggie, it’s easily wearable from childhood on up, and real stands-out/fits-in kind of choice.

What do you think of Magda? Does it feel glamorous or fusty?