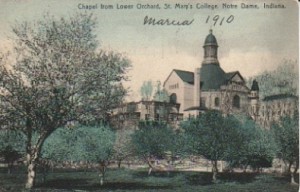 I’m in love with the first suggestion from Lurker Week.

Thanks to Angela for suggesting Madeleva as our Baby Name of the Day.

She’s one part Madeleine, one part Eva, and impossible to ignore.  But where did she comes from?

Madelief is used in Dutch, borrowed from madeliefje – daisy.  This makes her a cousin to the French Marguerite and the evergreen Margaret. Margaret always makes me think of Magdalena, the source of Madeleine.  They form a cluster of names related by meaning, origin, or sound.

They’re not related, of course.  Margaret comes from the Greek margarites while Madeline’s roots are in the place name Magdalen – of Magdala, as in Mary Magdalen.  The g was dropped in English, creating Madeline.

But not Madeleva.  If Madelief had been bestowed upon saints or royals, I’d guess Madeleva was the Latinized version – only Madelief doesn’t boast that kind of backstory.

Instead, Madeleva seems to be an invention for a young nun.  Mary Evaline Wolff was born in Wisconsin, and attended St. Mary’s College in Notre Dame, Indiana.  She decided to enter religious life early, and was accepted into the Congregation of Holy Cross in 1908.  She’d go on to have an extraordinary career as a medieval scholar, a poet, and eventually president of her alma mater.

It is widely reported that her name in religious life was derived from her given names, but Madeleva is no obvious smoosh of Mary and Evaline.  Madeleva has the ring of a clunky pre-Norman name, smoothed by time – Eoforhild into Everild, or Godleof into Godeleva.

Also known as Saint Godelieve or Godelina, Godeleva was an eleventh century Flemish saint, a young woman determined to dedicate her life to religious contemplation, despite pressure to marry.  It ends badly – she’s forced to wed, then murdered by her husband.  The young Mary Evaline could have tripped across her in writing or in works of art.

Did the aspiring nun choose a pen name?  Traditions around religious names vary between orders, and new members sometimes suggest their own.

Sister Madeleva’s academic career was a successful one.  Named president of St. Mary’s in 1934, she established the first program to offer graduate degrees in Catholic theology to women, as well as a school of nursing.  After nearly three decades of service, she retired in 1961.  The Madeleva Lecture Series bears her name, as does a building on campus.

The question is whether there were Madelevas before her.  The answer is not really – and yes.  None of the Madelevas I found pre-dated Mary Evaline’s birth.  But at least one predates her formal acceptance into the religious order, and a handful pre-date her rise to prominence.  A few other Sisters Madeleva are found, too.

It may simply be that Madeleva was in the air.  In 1908, -eva names like Treva, Reva, and Geneva were in use, and various spellings of Madeline were common.

Today Madeleva seems like a powerful choice for parents seeking something slightly different within the Catholic fold.  She’s a scholar, not a saint, but her accomplishments are impressive, and her name is undeniably appealing – smart, sophisticated, and current all at once.