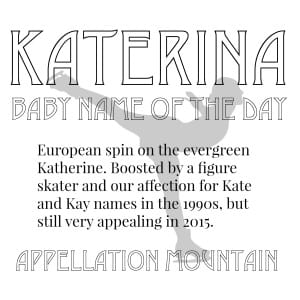 Katherine is a classic. Today’s let’s take a look at one of Katherine’s many cousins.

Thanks to Katerina for suggesting her name as our Baby Name of the Day.

Katherine is an evergreen name, with a long history of use, from saints and queens to actors and authors.

As Katherine has travelled across languages, new forms have emerged. There’s the Spanish Catalina and Native American Kateri. In Russian, it’s Yekaterina. Katerina is also heard in Czech, Ukrainian, Greek, and Bulgarian, as well as other European languages. Spelled Katarina, it’s big in Scandinavia and Germany, too.

It’s not a novelty, either. Katerina is recorded as a variant form of Katherine as early as the thirteenth century. The biggest boost for Katerina in the US comes to us from Germany via the Olympics.

Katarina Witt won her first figure skating gold medal at Sarajevo in 1984. She repeated the feat in 1988 at Calgary.

Women’s figure skating is among the most popular sports in the winter games. In 1988, Witt faced American Debi Thomas in “The Battle of the Carmens.” Both women were skating to music from Bizet’s opera. Witt brought home the gold, while Thomas had to settle for bronze.

As if all that wasn’t enough, she skated for unified Germany in the 1994 Lillehammer games. Witt has stayed in the spotlight, as a judge on the UK’s Dancing on Ice, as well as Stars auf Eis in Germany and a sometimes-actor.

But there’s no question that Katerina – in all of her possible spellings – rose as Witt became an international superstar.

An early Katerinas is actress Kat Graham, of The Vampire Diairies – born Katerina in 1989. (That’s her in the picture.) The series also included a character with the same name.

We can’t give all the credit to Witt. The 1990s were the age of Caitlin and Kaitlyn. Kayla, Kaylee, Kylie, and Courtney were climbing. Katerina hit the right note – feminine and traditional, nicely on trend.

And, of course, William Shakespeare’s Taming of the Shrew includes sisters named Bianca and Katherina – pronounced like Katerina. So there’s a literary tie to this name, too.

Despite an upswing in usage in the 1990s, Katerina was never common. Instead of feeling dated, Katerina seems undiscovered. And that makes the name a great option for parents after something feminine and traditional, but just a little bit different.

What’s your favorite form of Katherine? Is Katerina high on your list – or do you prefer Catherine or Kaylee or Karen?