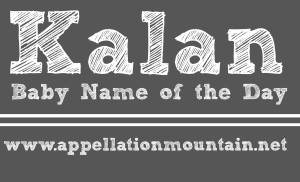 Invent a name, and you might find it surprisingly rich with meaning.

Thanks to Melissa for suggesting her son’s name as our Baby Name of the Day: Kalan.

I went looking for Kalan in the east, but I found him more places than I’d have ever guessed.

Melissa wasn’t certain of the name’s origins, and he’s often listed as an invented name.  There’s probably something to that.  We’re quite fond of Cal-/Kal- names nowadays.  Kalel – as in Superman’s birth name – currently ranks in the US Top 1000, thanks very much, Nicolas Cage.  And Callen and Callan both chart in the Top 1000, too, so Kalan’s just a hop, skip, and a jump from those choices.

But what could Kalan possibly mean?  It’s an international smorgasbord of possibilities:

So that’s a lot of globe-trotting, and yet it doesn’t show much use of Kalan as a given name.

For that, we’ll have to go to Canada.

Kalan Porter won Canadian Idol in 2004.  He’s among the show’s most successful alumni, though he’s still not a household name.

But there are more Kalans that you might expect.  The name was first given to more than five boys born in a single year in the US back in the 1970s.  By the the late 1980s, there were 20 to 40 newborn boys called Kalan every year.

That’s a lot of affection for the Cal- sound and the -n ending, and not much consensus on spelling.

And so Kalan’s strength – his pan-global vibe, the sense that he might have been borrowed from elsewhere – is also his shortfall.  He’s tough to pin down, and therefore, a potential spelling challenge.  But if you’re after something that feels right for a little citizen of the world, Kalan has potential.