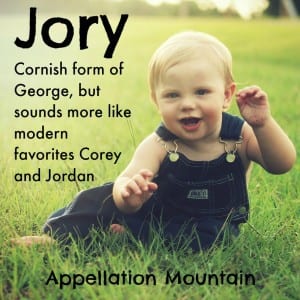 George is a past and future king. Corey was an 80s teen idol.  Does this overlooked name have potential?

Thanks to Sara for suggesting Jory as our Baby Name of the Day.

Jory: A Little George, A Lot of Corey 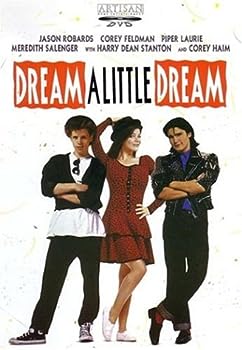 Cory and Corey were stylish kid names, as in young actors Corey Haim and Corey Feldman, paired together on memorable big screen escapades like The Lost Boys, License to Drive, and Dream a Little Dream.

Statistics proved it: George was a Top Ten staple through the 1930s, but fell steadily afterwards, leaving the US Top 100 in 1992.

Jory is a Cornish form of George, from the Greek georgos – farmer, the name of a popular saint best known for slaying a dragon. This should make Jory as much of a classic as Elspeth or Diego, or any foreign form of an evergreen name.

It’s also sometimes a surname, again from George, but this seems to be French. There’s a village called Saint-Jory in southwestern France, where the native language would once have been Occitan.

Soundwise, he’s more of a spin on Corey, respelled with a J, than a recognized classic.

Jory: On the Fringes

Some of the credit goes to the rise of Corey and company.  But pop culture gave the name a boost, too:

All of these uses are too obscure to inspire interest in the name in 2015.

But here’s Jory’s potential ticket to wider use: Game of Thrones.

George RR Martin has boosted Aria and Arya, and convinced at least a handful of parents to use names like Khaleesi and Bran.

Jory Cassel is a member of House Stark, who dies early – in the first season of the HBO adaptation, after appearing in just five episodes.  Scottish actor Jamie Sives played the role on HBO.  So he’s not a major figure, and maybe not one that we hear much about.

And yet – Game of Thrones names are not easy to ignore.

But with Rory on the rise, Jory seems like the kind of intriguing rarity that might be worth a second look today.

What do you think of Jory? Does it have potential in 2015?