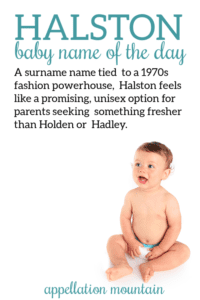 We recognize this as a surname, but its exact origins are debated.

It could come from Old Norse, where it would have been closer to Halstein, from the words for rock and stone.

The map might get credit, too, with multiple places given similar names throughout England.

Lastly, the German Holstein brings to mind cattle. But it’s actually a German surname, meaning “dweller in the woods.” In some cases, Holstein might have been simplified to Halston.

While the origins may be unclear, there’s no question why we recognize the name.

Never heard of him? He’s better known by his middle name – and middle name only – Halston.

A young Roy left Iowa for design school in Chicago and became a milliner. He created Jacqueline Kennedy’s iconic pillbox hat for JFK’s 1961 inauguration. That attracted plenty of attention and new business. It eventually led him into a full range of clothing. After all, hats were fading.

His collections became known for an easy, minimalist take on elegance. He embraced functional pieces, like pants for women, made in luxurious materials.

As his career progressed, he designed uniforms for an airline, the US Olympic team, and even the Girl Scouts.

Halston even ventured into the mass market, with a JCPenney collaboration. At the time, it damaged his brand. But ultimately, the decision paved the way for so many affordable collections from high end names at chains like Target.

Despite the brand’s tremendous success, no one named their kids Halston in the 1970s. It took the wave of preppy surname names to make parents cautiously consider this one.

Over the next three decades, the numbers held steady. A few dozen children received the name annually. It’s consistently used for more boys, but not by much. In 2018, parents welcomed 14 boys and 11 girls with the name.

Better for a Boy or a Girl?

We’ve named our daughters Hadley, Harper, Harlow, and Hailey – choose your spelling. That seems to put Halston on Team Pink.

Except, that we’re calling our sons Holden and Harlan and Hayes.

Safe to say that we like a good H surname name, and there’s no reason to give this name exclusively to either gender. Like Rowan and Briar and a handful of other names, it feels truly unisex.

That could change, of course. All it takes is one pop culture figure to nudge a name from unisex to gendered.

One possible spoiler: Halston Sage. The actor is known for her television roles, like Fox’s The Orville, as well as the movie Paper Towns and a small role in Dark Phoenix.

Or not. Because it’s every bit as possible another figure will emerge – fictional or real – and sway our opinion the other way.

For now, this feels like a great substitute for parents looking for something less popular than Marlowe or Boden. It’s an obvious substitute for other H surname names. And while it’s a brand – one still very much found in upscale stores through the Halston Heritage collection – it’s not a household name that way it might have been during the Studio 54 era.

What do you think of this name? Do you like it better for a son or a daughter? 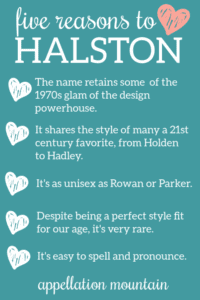