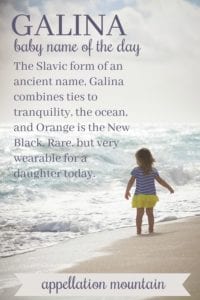 Galina sounds a little mysterious, a name that’s tough to pin down – but it could wear nicely.

Thanks to Crystal for suggesting our Baby Name of the Day.

Ancient names are white hot, for girls and boys alike. Galina almost belongs in that group, but it doesn’t sound like it, does it?

The name comes from Galen or Galenos, an ancient Greek name meaning calm.

Back in the second century, the Greek-born Galen became a physician, who eventually settled in Rome. He became a pioneer in medicine. And while a great many of his ideas were incorrect, he advanced our knowledge of anatomy, performed surgeries, and advanced the idea of treatment for psychological problems. That’s quite the legacy, and yet I suspect that many of the Galens born in recent years were named thanks to the on-trend sound, rather than the ancient physician.

Galina: Under the Sea

While we’re in the ancient world, let’s talk about a Nereid by the name. Or, more often, Galene.

Hesiod listed her, and others followed. Nereids were sea nymphs, daughters of sea gods Nereus and Doris. The couple raised fifty daughters, and they all grew up to help sailors and fishermen in distress, as well as accompanying Poseidon on his travels. They could be vengeful, too – remember the story of Perseus rescuing Andromeda from the sea monster? The monster was dispatched because the Nereids overheard Andromeda’s mother boast of her daughter’s beauty outshining theirs.

That almost makes this a mermaid name, or at least gives it a strong tie to the life aquatic.

One more appealing note: it’s said that Galene personified calm seas, a mash-up of her Nereid status and her name’s meaning. Galatea, another name from myth, carries the same meaning.

There’s a second tie to the natural world. Since the 1600s, galena has referred to lead ore. It’s a source of silver, as well as lead. We’ve been mining it since ancient times – the Egyptians used it as kohl, their signature eye makeup.

It appears all over the map, like Idaho’s Galena Summit. I assume most of the places were named for galena mines, in one way or another.

It’s worth noting that there’s no apparent link between the Greek word that inspired our Baby Name of the Day and this spelling. But given how close they are, it’s hard not to think of them together.

Galina: From Russia, With Love

The only place that we really find Galina is the Slavic world – mostly Russia. In Polish, it’s usually Halina.

That’s almost certainly because two saints by the name are venerated in the Orthodox church.

Plenty of notable women have answered to the name throughout the twentieth century – athletes and politicians and singers and artists. Galina Ulanova is considered one of the leading ballerinas of the twentieth century. But again, she’s Russian. In fact, the first time I remember hearing the name was during the 1988 Olympics.

Galina: Orange is the New …

Speaking of Russians, another one that might come to mind is the fictional Red from Orange is the New Black. When Piper arrives at Litchfield, she’s the powerful head cook in the prison kitchen. We later learn her backstory, and her full name: Galina Reznikov.

Kate Mulgrew plays the character, and she’s memorable. But she’s also called just Red almost all of the time, so unless you’re following the series closely, you might never know her given name.

Galina: By the Numbers

This name has never been common in the US. It debuted in the data in 1970. I wondered if it might be tied to the dancer, but Ulanova’s heyday was the 1940s and 50s. And while she was on American television – The Bob Hope Show, Disney’s Wonderful World of Color – it didn’t seem to have an impact.

Instead, maybe Galina Vishnevskaya gets credit. The opera singer was a staple in the 1960s, and made several recordings in the right time period.

What is certain? None of these Russian women, accomplished though they may be, ever became a household name in the US. Because in 2016? Still just six girls received the name. The 15 born in 2014 mark the name’s high point, and syncs with the second season of Orange is the New Black, when we learned more about Red, including her given name.

None of this makes it likely than Galina will catch on any time soon. One reason I love it? Nicknames include Galya, in the key of Tanya, Anya, and Katya, but also Gala. Gala makes a great, sparkling gem of a name, but might benefit from a formal name to back it up.

If you’re trying to combine Russian heritage with an outdoorsy name and a cool, edgy nickname, Galina hits all the marks. In our age of Camila, Elena, and Alina, it could make a great fits-in, stands-out choice.

What do you think of Galina? Would you consider it for a daughter?