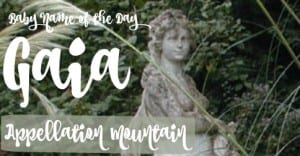 Maya is stylish, so why not this similar-sounding name from Greek myth?

Thanks to Liann for suggesting Gaia as our Baby Name of the Day.

Before there was Zeus and Hera and the better-known Olympians, the Titans were the gods in charge. And before the Titans came Gaia, the original earth mother. She created the heavens and the oceans, and with the heavens, gave birth to the Titans. She mothered a race of giants, too.

She was also responsible for saving Zeus, her grandson, from his Titan father, Cronus. Zeus, in turn, claimed the throne for himself.

The name is often used as a synonym for the earth itself, sometimes spelled Gaea, as in Pangaea, the supercontinent from prehistory.

The goddess is a popular figure in neopagan traditions, too.

This name fits right in with popular nature choices, somewhere between vintage Lily and Rose, and modern River and Willow.

The name rhymes with Maya, with a hard G sound: Guy-uh. Or that’s the most common pronunciation.

Pangaea is different, of course – the gaea rhymes with Mia. So I wouldn’t be stunned to meet someone who pronounces this name like Gia. 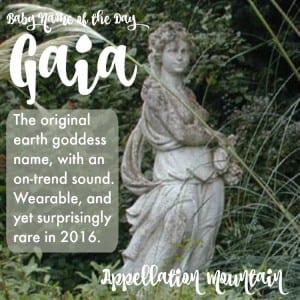 Like many a mythological name, Gaia begins on the fringes. It’s used for video game characters and in Marvel Comics, for a minor character in the extended X-Men universe.

The name has also been used for:

Gaia: In the Real World

The name was first given to more than five girls in 1980, when six newborn Gaias arrived in the US.

The name gained through the 1990s. We could credit Marvel or those animated Planeteers, but likely it was a combination of other factors:

This makes Gaia a great choice for parents after something feminine, rare, rooted – in this case, in both history and the natural world! – and with an on-trend sound.