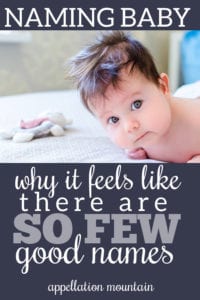 How can it be that countless websites, apps, blogs, and old school books still leave us feeling like there are fewer baby names that we expect? Let’s take a closer look.

My parents’ worn-out baby name dictionary was one of the first books I read. Wait, make that constantly paged through, committed to memory, used as the basis of a life-long obsession.

The book is Name Your Baby by Lareina Rule. (Isn’t that a great name? The queen who rules …) The copy I grew up with fell apart, but fate brought me another. It indicates that the book was first published in 1963, and had enjoyed its 40th printing as of 1981. It’s no longer updated, but used copies are plentiful.

This bestselling book includes over 6,500 names. And even those 6,500 represent only a drop in the ocean. I discover new-to-me names nearly every day. That’s sort of shocking, right? The number of potential baby names is infinite. You could have two dozen children and never run short. Right?

And yet many parents who have tried to find a name for their child report that there aren’t any. None! All the good ones are taken. Nothing works. They’ve reached the end of every baby name book, website, and blog list.

The funny thing? In many ways, these parents are right!

Even in a galaxy of thousands upon thousands of possibilities, there really aren’t that many baby names for your family to consider.

Are Jackson, Jaxon, and Jaxson three names, or one? I think they’re very different in feel, but it’s tough to argue that Jaxson and Jackson are completely different names.

Ditto Adalynn, Adalyn, Adelyn, Adelynn, Addilyn, and Addilynn. And while I’ll concede that Adeline and Adaline might be pronounced differently, they might not.

In some cases, parents obviously got creative with a name’s spelling. The new spelling attempts to make the name stand out. I can’t explain why I love the idea of Allison spelled Alicyn. But I do.

Whether you love a creative spelling or find them frustrating, variant spellings have always been around. Rarely can we declare one spelling “right” and the others not.

What we do know is this: combine spellings, and there are many fewer names in the current Top 1000. The Adelyns alone cut the list to 992 or so, depending on your method. There are 8 Madelyns and 4 Maddisons, 3 Mackenzies, 2 Annas, 3 each of Lily, Zoey, and Leah. The list shrinks.

Looking beyond the Top 1000 reveals some underused gems, but also many, many more spelling variations that just add to the list of Adelyns.

Clusters of names tend to rise – and fall – together.

The popularity of Lucy opens the door to Louis for boys, Louisa for girls, and Lou for both. But is there a big difference between Lucy and Lucille? How ’bout Lucy and Lucia? You may prefer one over the other, but the sounds aren’t so different.

Plenty of clusters populate the Top 1000. There are ten Lily names in the current Top 1000. Boys’ names rhyming with Aiden have dominated recent baby naming trends.

Even though Hayden and Lilia are great names, it’s easy to imagine parents feeling like they’re too common – even if they’ve never met a child with the actual name. And, of course, once you’ve named your son Luke, the rest of the Lu-/Lou- names are (probably) off limits.

Some parents will blithely choose names without regard for popularity. They’ll name their kids after Aunt Denise or Grandpa Darrell, even if those names are teetering on the edge of extinction.

This gets confusing, because a great many parents will say that they chose Sophia or Liam because they wanted a name that felt timeless instead of trendy. But while Sophia and Liam have history aplenty, they are currently very popular baby names.

If you look at the data, around half of the names in the US Top 1000 fall and around half rise every year. Some of those falls translate to dramatic plummets, often associated with pop culture names like Miley that do feel trendy.

More of the falling names simply feel dated, a definition that shifts from year to year, and person to person. But it can make great names – even traditional names with a long history of use – feel less wearable today.

They’re not bad names; they’re just off-cycle. Embracing them can mean the best of both worlds – names that are easily pronounced and spelled, but seldom shared by anyone else in your child’s kindergarten. (Well, except maybe the teacher.)

And yet, we often feel like that’s not an option for us. Rule out those falling or off-cycle choices and there will be fewer baby names to add to your list.

After all, around half the names in the US Top 1000 fall every year. If even half of those falling names feel too dated for you to consider, that’s 250 names eliminated.

Parents who hesitate to choose Brendan or Deborah because they don’t feel current will probably have a similar reaction to many choices beyond the current Top 1000. Even though Gertrude and Clement really are great names!

There have always been names in the US Top 1000 that reflect the rich and varied linguistic and cultural traditions in our country.

Some of those names are well-established. José has never left the US Top 1000. Others, like Irish heritage pick Maeve, are relative newcomers.

But even if you love Irish names or Spanish names, relatively few families will make these choices without a tie to the language or culture.

Not every name will feel like a fit for your family, and that means letting go of even more possibilities for your child.

MOST OF US WANT THE SAME THING

Parents tend to want the same thing: a name that’s not too common, not too out-there. We prefer something easy to spell and pronounce. Hopefully many people will like the name. We’re avoiding trendy names, and we’re (probably) not braving 1960s revivals, either.

Every family’s preferences are a little different: nickname-proof or nickname-rich, clearly gendered or unisex, rooted in history or freshly modern, maybe with ties to a particular heritage. But we tend to layer our style preferences over a similar framework.

The outcome? Many fewer baby names to choose from! Suddenly the list of infinite options shrinks to just a few dozen.

But it’s not necessarily all doom and gloom.

It can be overwhelming to look at lists and lists of possibilities. But the fact that there are fewer baby names than it first appears can be freeing.

That’s because your shortlist actually might be pretty short.

Imagine this: you’re looking for a name for your daughter. You’d like something short, nickname-proof but not a nickname, and maybe not in the Top 100 – but definitely an easily recognized name, preferably with an obvious spelling. You swoon over vintage names, but only if they seem right for a girl born today.

If you can draw the criteria for the kind of names you love, chances are good that you’ll find the right name for your child – waiting on a pretty short list.

And if you draw those criteria, but don’t find The Name, that’s a good signal to discuss your priorities in choosing a name. Maybe it’s time to embrace that longtime favorite that feels too popular. Or to consider a name that feels bolder than you might have imagined.

Not really. In theory, we could come up with a dozen new names every day of our pregnancy – and beyond.

The key is to know that a certain kind of name – the ones that you will realistically be willing to consider for your child –  are finite. As with house shopping or selecting a wedding venue, you’re better off to spend your energy evaluating the best possibilities available to you, rather than forever broadening your search.

Know that the right name for your child is probably already on your list. With so many options, it’s just tough to see it.

What do you think? Do you agree there actually are fewer baby names to consider – even as it looks like the list is massive? Or do you think that it’s truly difficult to narrow down specific criteria to create the shortlist in the first place?

First published on September 9, 2016, this post was revised substantially and re-posted on February 25, 2021.

Looking for more name talk? Sign up for the Appellation Mountain newsletter, sent every Tuesday: