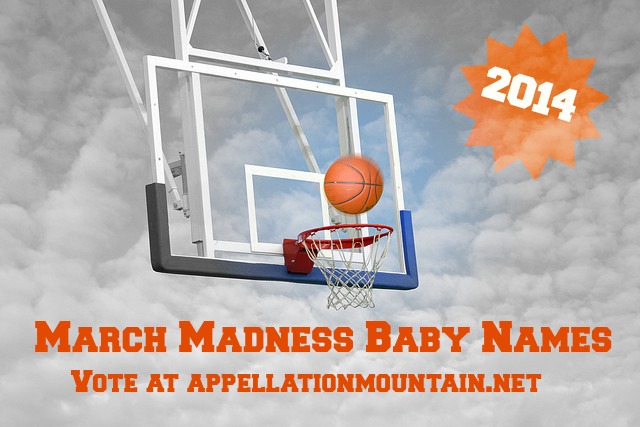 Can you believe we’re at the March Madness 2014 Semi-Finals already?

Most of my favorite names for boys are gone, but the merits of the remaining names are undeniable.  I tend to always feel this way at the competition’s midpoint.  Yes, I’m missing Huxley and Caspian and Fox, but how can I not appreciate the names that advanced?

There was only one real landslide in this round: Finn trounced Huxley.  But the boys’ Quarter Finals did feature the closest match so far this year – and possibly in the history of March Madness.  Soren and Beckett were separated by just two votes.

Read on to find out who won that super-close match … and vote in the Semi-Finals while you’re there!

#9 seed Atticus triumphed over #10 seed Holden in the Quarter-Finals.  Now the ancient appellation faces off against the winner of the Soren/Beckett match.  At the time the contest closed, they were split 50/50!  But when I looked at the actual votes, Soren was ahead by two mere votes – not enough to adjust the percentages, but enough to declare him the winner.

But who will advance to the final round?  Only you can decide!

Next up, #2 seed Huxley lost to #10 Finn.  And not by a little – by a lot!  Finn captured nearly three-quarters of the vote.  I’m a huge fan of Huxley, but he’s not for everyone.  Finn, on the other hand, has broad appeal.  No wonder he carried the day in the Quarter Finals.  This pits Finn against the winner of the Caspian/Everett match.  This one wasn’t as close as Soren/Beckett, but it was tough to call, with Caspian in the lead for a while until Everett finally pulled into the lead, winning the match 56% to 44%.

This seems like a tough match.  Which do you prefer, Finn or Everett?

This round runs through Friday, March 21st.  Thank you for voting – and please check back on Saturday, March 22nd for the Final Match-up!