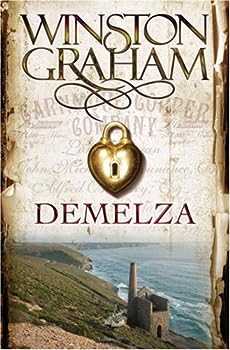 Thanks to Kathryn for suggesting Demelza as our Baby Name of the Day.

Demelza and the Revival of the Cornish Language

Let’s start out in Cornwall.

Cornish was around long before English came to dominate the British Isles.  It was nearly extinct when before a twentieth century revival, and it is now recognized as a minority language in the UK.

Along with the cultural revival came an interest in Cornish given names.  Enter Demelza.

The Cornish Language Project includes Demelza on their list of given names.

Two meanings are given:

The sweet meaning comes straight out of a novel.  Winston Graham moved to Cornwall as a young man.  Twenty years later, he published Ross Poldark, the first in a series of eleven novels written between 1945 and 2002.

There’s no evidence for the use of Demelza before Graham’s novels.

As for that meaning, credit Graham again.  I’ve read that Graham found it on a sign post and found the meaning listed in another book.  The meaning is repeated in the book.

Demelza might have remained a Cornish rarity if not for the BBC.

Between 1975 and 1977, Poldark was an absolute sensation on Sunday evenings.  Legend has it that churches changed their evening service times rather than compete with the show.

A thumbnail sketch: Ross Poldark was in love with the beautiful, well-born Elizabeth, but she became engaged to someone else while he was away at war.  Heartbroken, Ross marries the servant girl Demelza.

Demelza might be Elizabeth’s opposite, but she proves herself brave, loyal, and funny.  The character was beloved, as was actress Angharad Rees, who played Demelza in the original television adaptation.

It’s the 1700s in Cornwall, and Ross Poldark runs tin mines.  Not exactly Dallas or Dynasty, but the story lines are surprisingly the same – affairs, murder, family discord across generations.

Poldark appears on many a Best Of list, and was shown on Masterpiece Theater in the US as recently as 2007.

Demelza has never cracked the US Top 1000, and only a handful of girls received the name during the show’s heyday.

Now the BBC has announced a new adaptation of the series set to debut in January 2015.

In our Downton Abbey-world, American audiences are very ready to tune into BBC period dramas.

It’s already been announced that the new production of Poldark will be shown on Masterpiece Theater in early 2015, too.

Could this be Demelza’s moment?  Downton Abbey has boosted Cora, so it could be the perfect moment for this Cornish rarity to catch on.

Demi – as in Moore and Lovato – makes a great, wearable short form, and that ‘z’ ending is as current as they come.

What do you think of Demelza?  Do you think the new television series will boost this name?