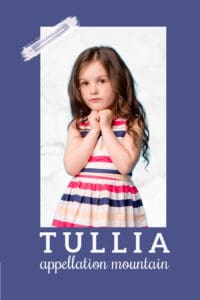 Thanks to Caite for suggesting our Baby Name of the Day.

Most of us probably learned a little something about the rise of the Roman Empire at some point in class.

Even if you skipped that day in school, chances are you’ve heard of Cicero.

Trained as a lawyer, Marcus Tullius Cicero served as Roman consul during the first century BC. After Julius Caesar’s death, Cicero advocated for a return to a republic government.

That’s not what happened, of course.

Executed in 43 BC, Cicero left behind a treasure trove of writings. His influence on written Latin is significant. His writings influenced thinkers from the Renaissance through the Enlightenment.

But this isn’t about Cicero.

It’s about his daughter.

Tullus was a relatively uncommon Roman praenomen – given name. Tullius became a gens, a family name, based on Tullus.

The legendary third king of Rome was Tullus Hostilius. Way back in 500 BC, Manius Tullius Longus served as Roman consul.

That made Tullia the feminine form of Tullius. And so Cicero’s daughter was Tullia, or, sometimes Tulliola – little Tullia.

Not much is known about her life, but in fifteenth century Rome, it was believed that her burial site was discovered, complete with a lamp still burning ever since her death fifteen hundred years earlier. John Donne refers to it in a poem.

Not surprisingly, the baby name Tullia survived primarily in Italy.

Spelled Tulia, it also appears in Spanish and Polish.

Masculine forms Tullio, as well as Tulio and Tulli, sometimes appear as surnames, too.

Born in Rome early in the sixteenth century, Tullia d’Aragona became a poet and philosopher, among the most famous women of her age. Widely traveled throughout Italy, she’s among the most celebrated of Renaissance poet-courtesans of her age.

Some of her writings remain and have been translated, as does at least one famous portrait.

Looking for the meaning of this name proves challenging.

Many an obscure ancient Roman family name comes from Etruscan. That may be true for Tullus and Tullius.

There’s also Attius Tullius, leader of the Volsci in the fifth century BC, a rival tribe to the Romans. He appears in Shakespeare’s Coriolanus as Tullus Aufidius.

None of that hints at possible meanings of the name.

However, some sources suggest:

Fans of My Big Fat Greek Wedding might also think of main character Toula Portokalos. Her name was short for Fotoula, a rarity ultimately derived from Photine, a figure in the New Testament.

American English speakers will almost certainly rhyme it with Julia.

Plenty of -lia ending names – think Amelia and Cordelia – do soften into more of a -ya ending, so it’s possible to give Tullia a two-syllable pronunciation.

The baby name Tullia is so rare that it’s really up to the bearers how to pronounce it.

As of 2021, the baby name Tullia appeared in the US Social Security Administration (SSA) data just three times, all in the twenty-first century. Sixth births were recorded in 2014, a new record.

Tulia is slightly more popular, with six girls receiving the name in 2021.

Of course, SSA data only records names given to five or more children of a single gender born in the US. Census records fill in the blanks with more immigrants with the first name Tullia.

There’s something so appealing about finding truly obscure ancient revivals. They have history, even if it’s not top-of-mind.

The baby name Tullia sounds fully formed, a name with a story to tell. And yet, it’s so rare that you almost certainly won’t meet another.

So while the origin and meaning of the name Tullia remain hidden in the past, there are lots of reasons to embrace this strong and pretty name for a daughter. The Italian poet, the ancient figures, the ties to multiple languages and meanings.

If you’re after an obscure choice with a mainstream sound, Tullia fits.

What do you think of the baby name Tullia? 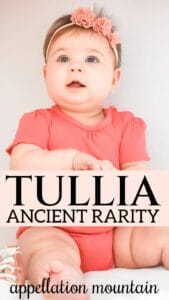 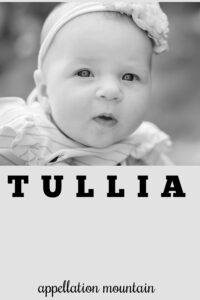