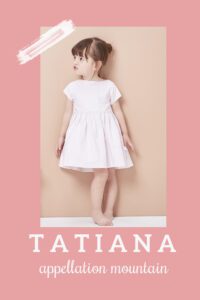 The baby name Tatiana shimmers, a traditional name only discovered by native English speakers late in the twentieth century.

Thanks to Tatiana for suggesting her name as our Baby Name of the Day.

Legend tells of a Sabine king, at odds with Roman ruler Romulus in the 700s BC.

The quarrel? The Romans had kidnapped thirty women to serve as brides for the many unmarried men in the young kingdom.

Titus Tatius and Romulus did battle until the wives themselves convinced their countrymen to pursue peace instead.

Afterward, the two kings ruled jointly, though the Sabines were ultimately absorbed into Rome.

The names endured, both as the feminine Tatia, as well as family name Tatii.

The exact meaning is lost to time.

We know the name endured, because in the third century we meet Saint Tatiana. Secretly raised a Christian, she refused to denounce her faith. She was tortured and ultimately killed.

She’s always been a more significant figure in the Orthodox church – and in Eastern Europe – than in the West.

In fact, American parents used the name sparingly in the early twentieth century. Only a handful of women born in the US received the name. That remained true well into the 1960s and 70s.

If you know your tragic princesses, the Romanov sisters probably top the list.

The last hereditary king to rule Russia was Tsar Nicholas II. He and wife Alexandra were the parents to Alexei, their fifth and youngest child, as well as four girls: Olga, Tatiana, Maria, and Anastasia.

They were murdered during the events of the Russian Revolution in July of 1918.

Indeed, the baby name Anastasia rose in use during the same era.

It sounds unfathomable in 2022, but during the 1960s – during the Cold War – Russian culture became quite fashionable.

In 1963, the second James Bond movie, From Russia with Love, hit the big screen. One of the characters’ names, Tatiana Romanova, hints at descent from the ill-fated royal family.

But the real credit goes to Boris Pasternak’s 1957 novel Doctor Zhivago, which became a 1965 Hollywood blockbuster.

Balalaika music – and “Lara’s Theme” – was everywhere. Chances are you’ll recognize it, even if you’ve never known it before.

Tatiana perfume was introduced by Diane von Furstenberg in 1975.

And while it was established in the 1920s, New York City’s Russian Tea Room became a noted restaurant in the era.

Of course, the baby name Tatiana is broadly used across Slavic-speaking countries.

The stage was set for parents to discover the baby name Tatiana.

The baby name Tatiana peaked at the very end of the 1990s.

And why not? Alexandra was in the Top 30. Anastasia was trending, too.

If you’re after an elaborate, feminine choice, the baby name Tatiana might suit. And though it has fallen out of favor, it never became particularly popular. That means instead of sounding dated circa 2022, it just feels pleasantly familiar.

Now that Canadian actor Tatiana Maslany has graduated from Orphan Black to She-Hulk, the name might attract a little more attention.

But if you’re after something with rich history that’s seldom heard, Tatiana qualifies.

What do you think of the baby name Tatiana? 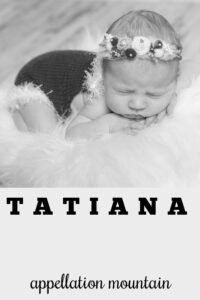