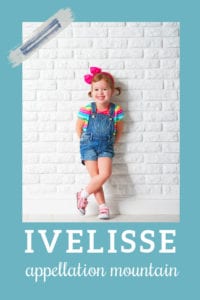 Thanks to Hettie for suggesting our Baby Name of the Day.

For every Annabelle, there’s an Avalena – a compound name just as attractive, but not nearly as popular.

Except maybe it’s more likely that the baby name Ivelisse is a Josephine – a common first, elaborated with a common ending.

It’s just not one that never caught on – not quite.

Nearly all of the Iv- and Yv- names trace their roots to yew, as in the tree.

And with good reason, too. Yew trees have long been sacred, even in the pre-Christian era. The trees live for ages – some for as many as 2,000 years. They can symbolize longevity, as well as eternity and the afterlife. (And, occasionally, death, since they’re a) toxic and b) often planted near churchyards. Despite this, the symbolism feels overwhelmingly positive, at least today.)

The Germanic element iv, meaning yew, gave us Ivo, which became Yves in French. The Norse Ivar and Ivor may be cousins. Iva and Yvette followed. So did Yvelin and Yveline, also in French.

The baby name Ivelisse likely emerges from this same process, a mix of Yvette and Elise, influenced by Yveline.

At least, a 1923 Italian novel by Guido da Verona was titled Yvelise. Verona was probably the most popular Italian author at the time, and his bestseller Mimi Bluette had been published just a year earlier.

The numbers show that it made a difference – at least in France, where the name’s popularity peaked in 1952.

So far, this tracks. The baby name Ivelisse seems like it comes directly from Yvelise.

But how did the spelling change?

It might be down to French influence in Puerto Rico.

Here’s what we know: during the 1900s, a great many settlers arrived in Puerto Rico from the island of Corsica, in the south of France. The Spanish government encouraged it, hoping to bring more Catholic settlers to the island in an attempt to maintain control of the colony. In turn, economic unrest at home made immigration desirable for the Coriscans.

It’s worth noting that Corsica was long part of the Italian city-state of Genoa. That means that Corsicans immigrants brought French culture and Italian surnames. They also spoke Corsican, a close cousin to Italian.

So while the records suggest that the immigrants used familiar Spanish names – think Angela and Ana Lucia – it’s possible names in actual use varied slightly.

All of this means that a spelling change from rare Yvelise to equally rare Ivelisse isn’t surprising.

It’s remained in heaviest use in Puerto Rico and other Spanish-speaking countries. Figures like pro wrestler Ivelisse – yes, it’s her birth name – confirm that, and also introduce the name to a wider audience.

Two other theories repeat often online, but they’ve proven impossible to pin down.

First, some claim that the baby name Ivelisse means life. While there’s no linguistic evidence, the tree’s symbolism might suggest this meaning.

We love a great flower name, so this feels particularly compelling. And Ivelisse isn’t miles removed from Jessamine, a medieval form of jasmine. Plus, Yasmine is used in French, so that takes us a step closer to Yvelise, too.

Still, flower names usually leap off the page – even fairly obscure ones. This makes for an appealing meaning, but it remains unverified.

One of the challenges of tracking down the baby name Ivelisse is the sheer number of possible spellings: Iveliz, Ivelice, Ivelys, Ivelis, Evelise, Yvalisse … the list goes on and on.

Let’s look at some numbers:

The spelling variations are nearly infinite. It appears that Ivelisse has emerged as the standard in the US, but by a tiny margin.

Yvelise limoncello is – or perhaps was? – produced in New Orleans. It feels like a very New Orleans name, all romance languages and mystery.

Quiet mentions abound, on family trees and personal stories. In many forms, this name appears on the edges – a middle name inherited from a grandmother, or a name recognized by those of Puerto Rican or Caribbean descent.

While the baby name Ivelisse has proven elusive, it’s also worthy of consideration for parents set on something stylish and rare.

What do you think of the baby name Ivelisse? How would you spell it?