Baby Name Help is a new series at Appellation Mountain. Every Saturday, one reader’s name questions will be discussed.

Jenny and her husband are expecting a son in early 2015, and they’re struggling to find the right name.

My husband is English and I’m American.

We’re looking for names that are both somewhat common in both countries but not top 20 material. And we’re completely and totally stuck.

Other than that, we’re open!

Jenny also added that they have one name that they both don’t hate … but both of them think the name is pretty much meh – so let’s start fresh!

Read on for my ideas – and please add your suggestions in the comments.

This is an interesting challenge, Jenny.  During my trip to London earlier this year, I realized that names like Simon, Barney, and Nigel were really quite normal for men my age.  But in the US, of course, those same men are usually Mike and Ryan and Jim.

It’s a good reminder that everyone has a different definition of a normal name.

And yet, the good news is that we’re working with just one language, and the amount of overlap is considerable.

Before we get to specific names, I wonder if we should take a minute and think about categories of names: Now, on to the names that might suit a British-American boy.  Let’s start with classics:

Now, to the modern favorites, where there are plenty of options – though the percentage of overlap between the UK and US is less:

Now let’s look at emerging possibilities.  These are names that might strike you as a little bit out there.  But they’re actually catching on quickly, and would fit right in with on the playground and beyond.

A few random ideas that don’t fit in any category – but feel like they might be a name for you:

Okay, that’s an awful lot of possible directions – from Vincent to Isaac to Cameron.  I’ll admit that Owen is my personal favorite, followed closely by Theodore – but I’d love to hear what others think!

Congratulations to Jenny and her family.  What would you suggest for a British-American boy?  Please share your ideas below! 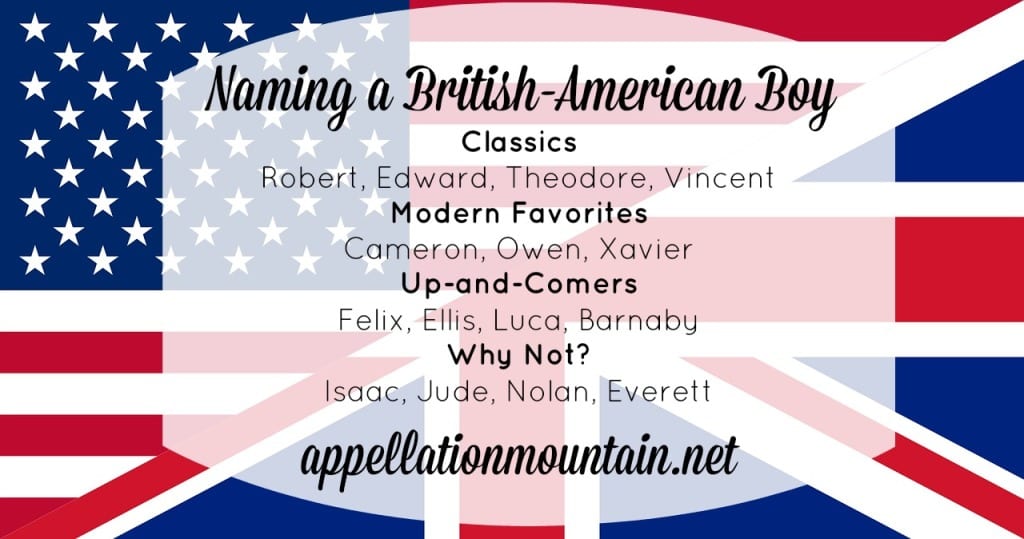